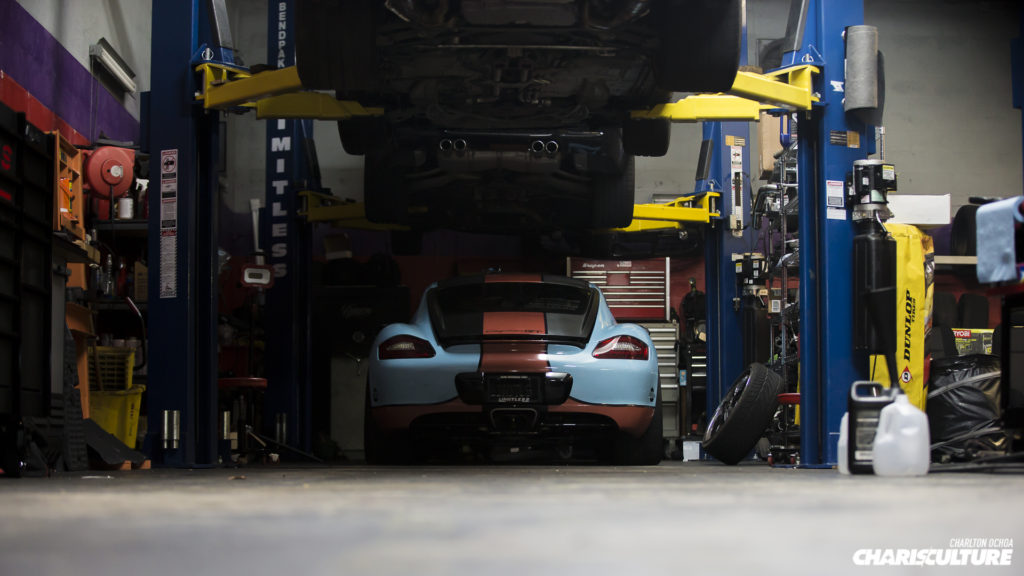 At the Charis Culture, we always love a unique build. When my friends over at Limitless Motorworks in Miami informed me that they would be building a Coyote powered Porsche Cayman, they immediately had my attention. I’ve known these guys for quite a while and spend a decent amount of time with them at Florida motorsport events. When it comes to building track cars or providing track support for drivers, these guys are top notch. That being said, I knew this build would be no exception. 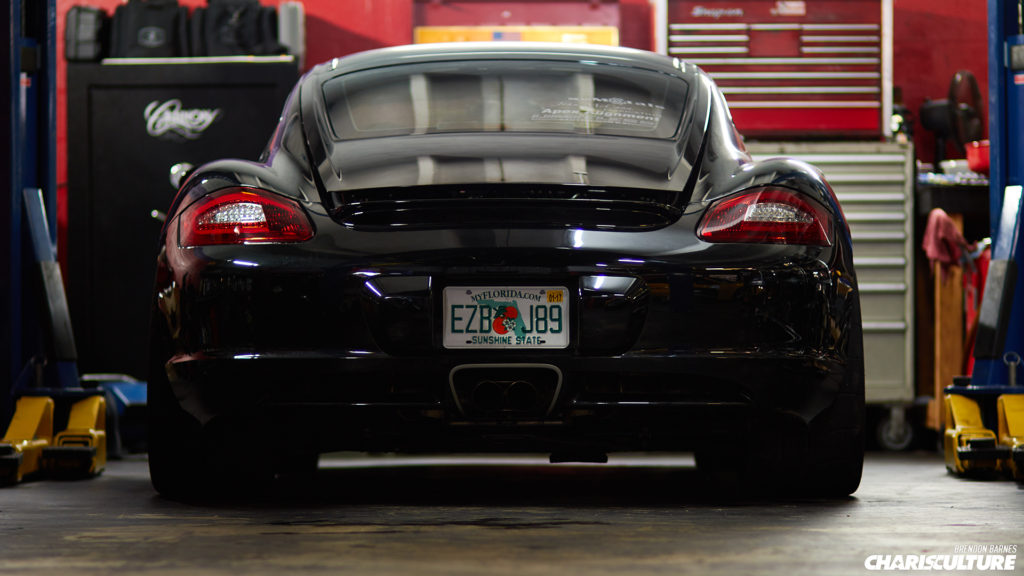 The owner of the car is a gentleman by the name of Yu Fang. He has had the car for 2 years and is no stranger to south Florida track days. Damaging the 987 motor during one of those days at Homestead-Miami Speedway is what prompted this build. David and his team at Limitless tried sourcing out a new engine for the car, but a $15,000 price tag made it hard to pull the trigger. This is where Yu Fang started asking his good friend Joshua Stone questions about his car. Joshua currently owns an LS3 powered BMW E36 M3. The idea was to initially put an LS motor in the Cayman. After some research, they decided to go with a Ford Racing 5.0 Coyote Aluminator Crate Motor which would be better suited for track days. The decision was made and it was time to push forward with the build. 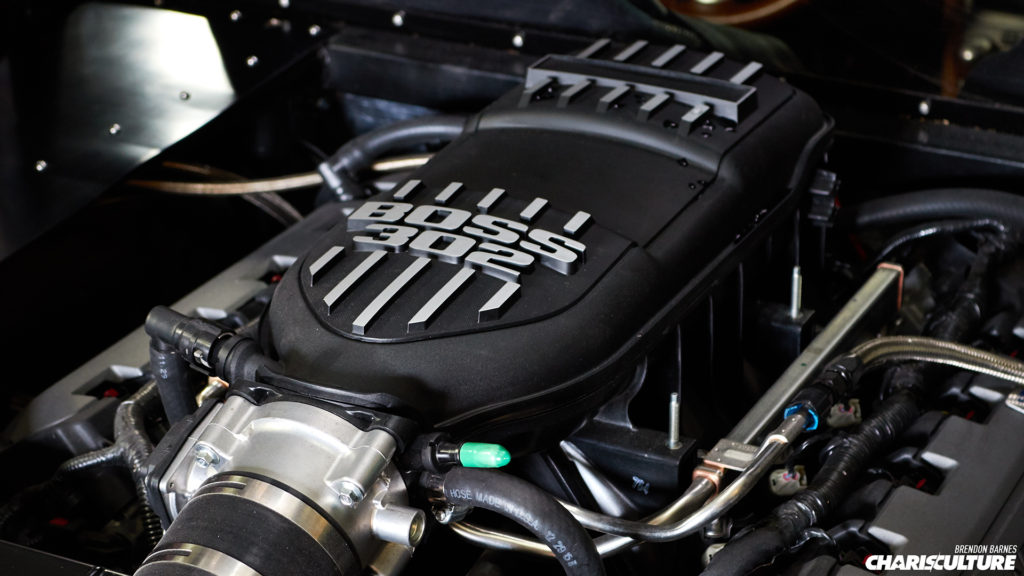 The Coyote motor was sourced by Bill Guthrie of Spray It Racing in Miami. After the motor was delivered, John McCann of John McCann Fabrication went to work on fabricating motor mounts, transmission mounts, equal length long tube headers, and new firewall with a plexiglass window. The Ford motor was mated to the Porsche transmission via a Renegade Hybrids bell housing. Standing beneath the car was a sight to see; every part seemed as though it belonged there from the start. 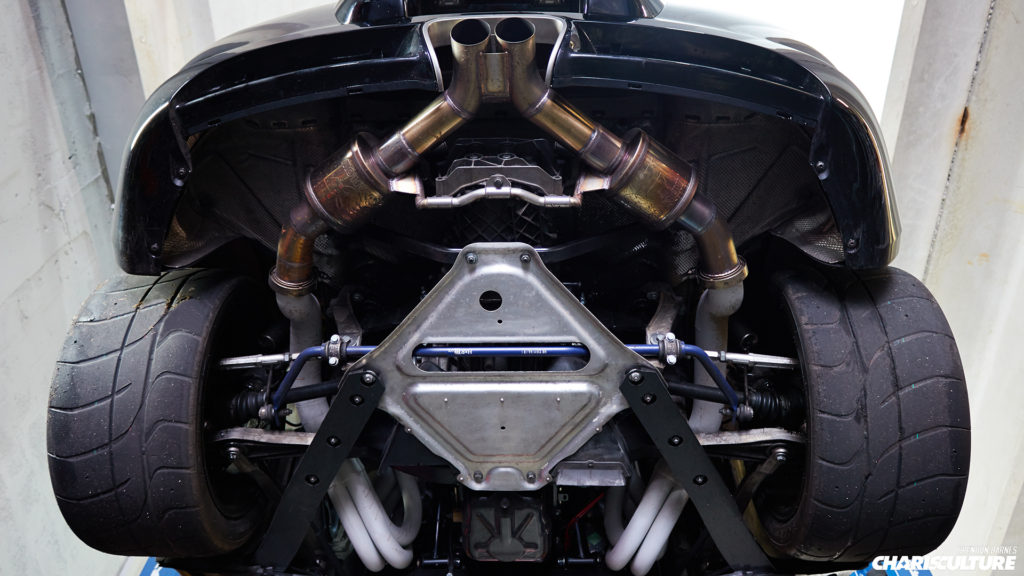 David and his team at Limitless Motorworks wired up the car when it returned from John McCann fabrication and immediately shipped it off to Power by the Hour where it was remotely tuned on their DynoJet by Lund Racing. The car would go on to make 424 whp and 364 wtq. That is nearly double the power that the stock 987 motor puts out. 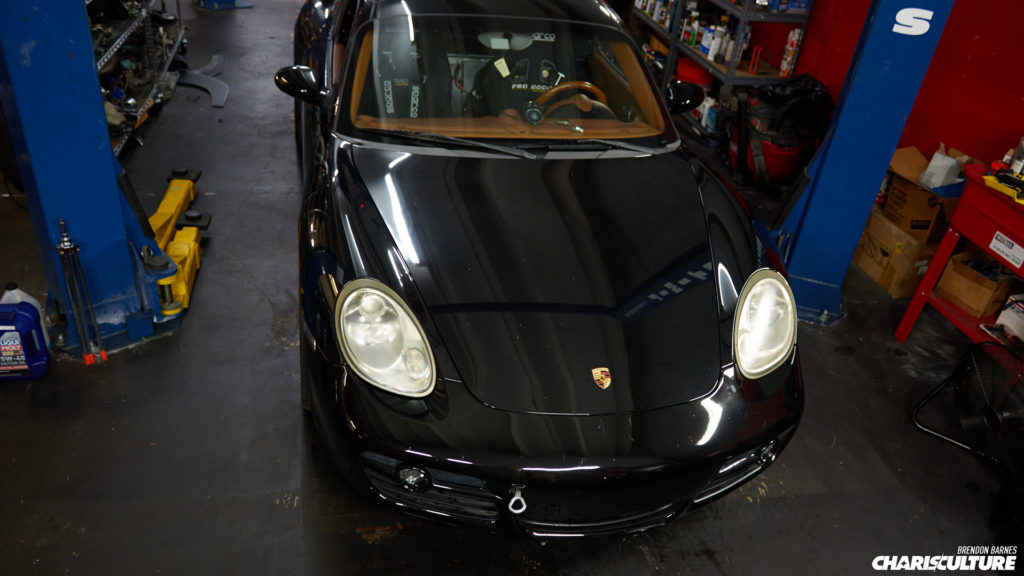 Car enthusiasts seem to divided on this particular build; As video of the car on the dyno made its way around the internet over the past few weeks, it received its share of both praise and criticism from the Porsche purist. 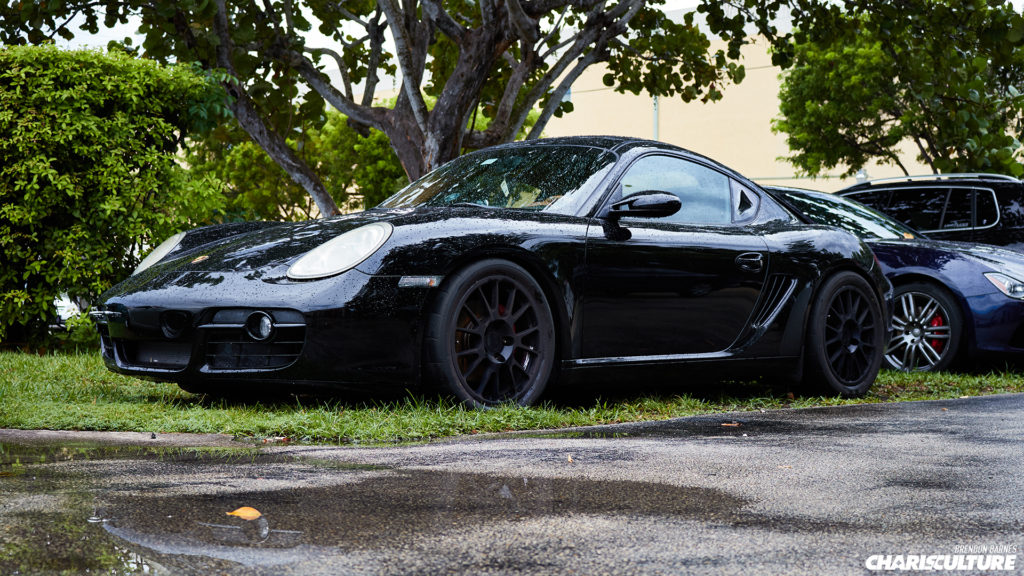 The car was almost ready to make its way for track testing. But first, it needed to get aligned. When it comes down to alignment, there’s none better than Albert from Apex Alignment. If you attend any motorsports events down south, you’re likely to see a lot of Albert’s work out on the track. He truly is a master at what he does. With the new engine and fab work the car weighed in at just a tick under 3000 lbs. This is only about 50 lbs heavier than when it had the stock motor in it. The car’s weight distribution improved also, since the Coyote engine sits 4 inches further to the front of the car and about 2 inches lower. 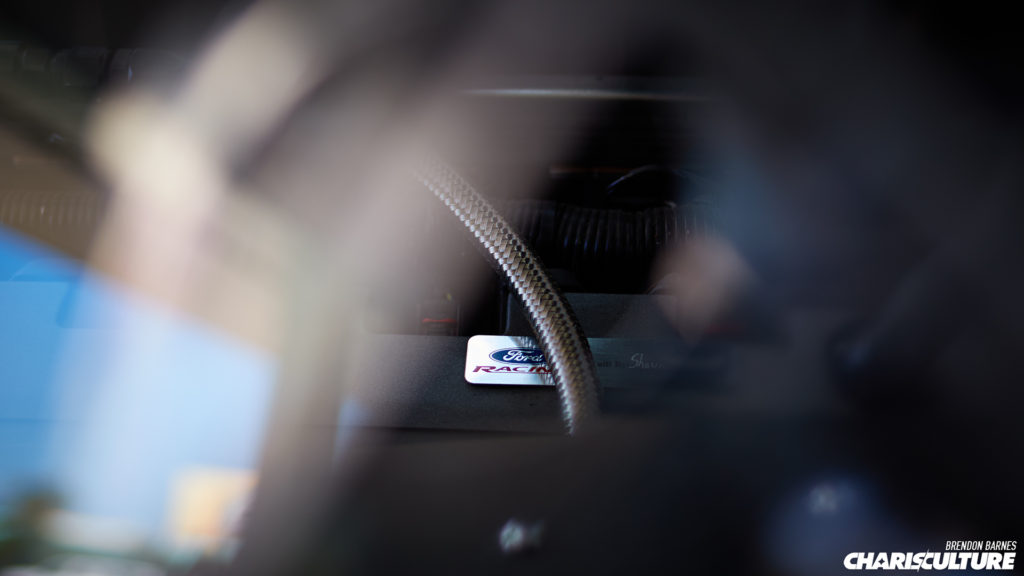 Each engine that Ford Performance sells is hand assembled and the individual who assembles it engraves their name on a plate that is attached to the motor. It’s a nice touch. I wonder if Shawn Stanszewski knows that the engine that he assembled is now the heart of this Cayman. 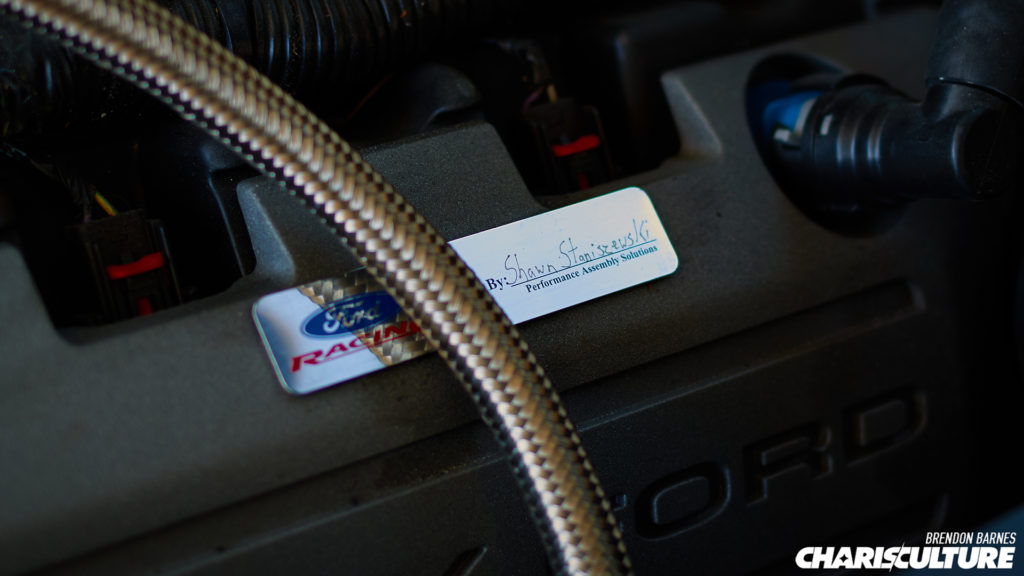 The time had finally come for Yu Fang to get behind the wheel of the Cayman. He hadn’t driven it on track for 15 months and here we were. Homestead is the last track the car saw before it’s engine failure and quite a few of of the individuals that had a hand in the car’s build were on hand to witness its maiden post-build outing. 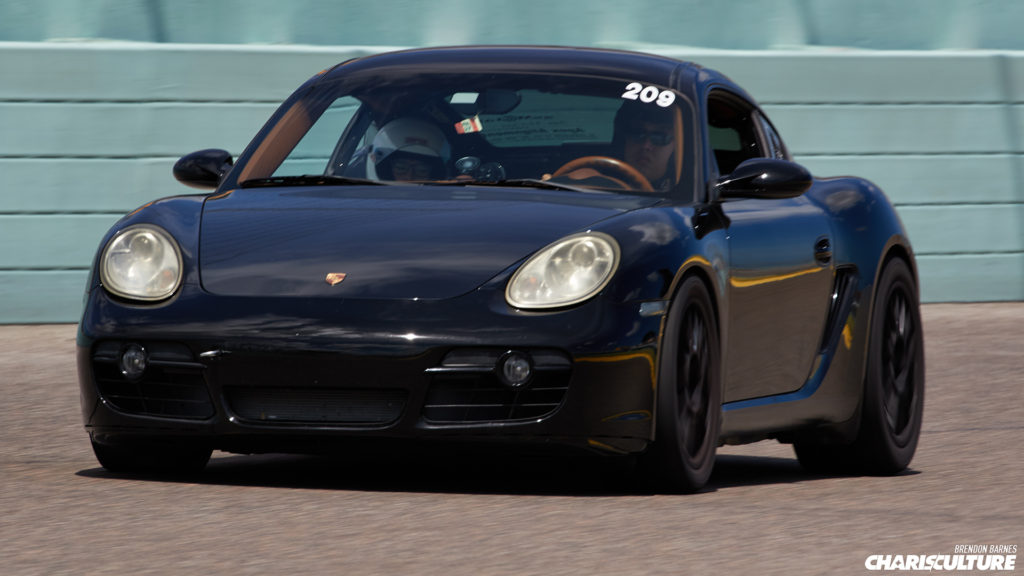 The Cayman looked and handled great on track and was a rocket in the straights. The balance of the car was perfect; handled the road course at Homestead-Miami Speedway without any issues. Seeing all the hard work of everyone involved finally come together even put a smile on my face. 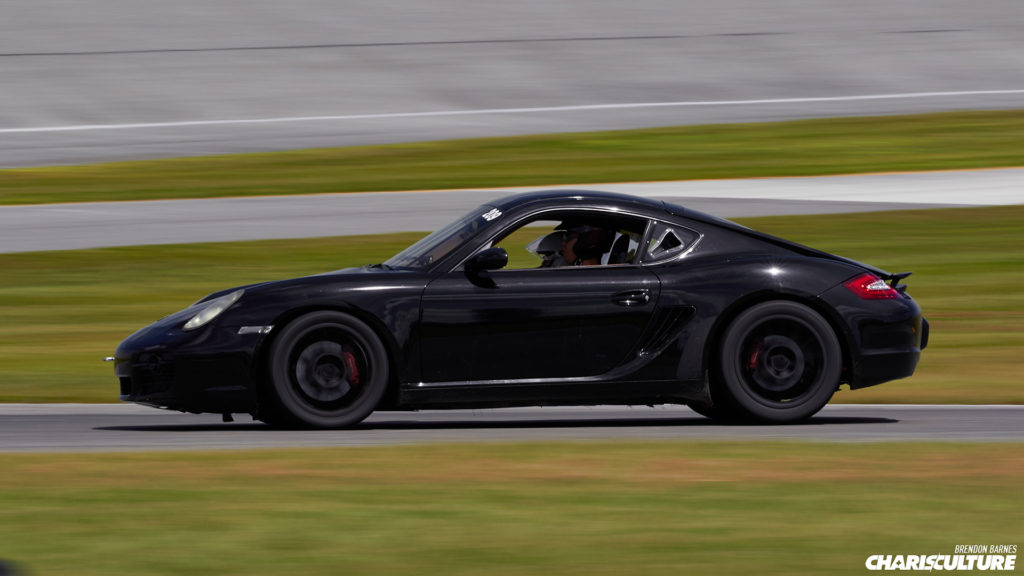 That’s not how this story ends. It was now time to finish the car. SEMA was around the corner and the Cayman would undergo a transformation for its trip to Las Vegas. Limitless Motorworks worked with The Sign Savers, who are the southeast go to for vehicle wraps. They worked on a render that would pay homage to both Porsche and Ford. 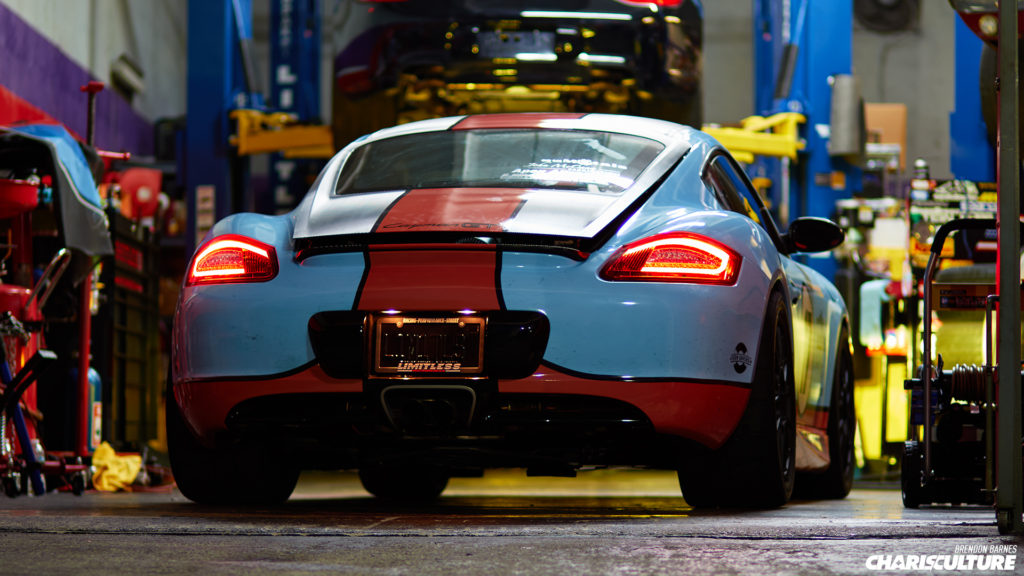 Minus and I took the opportunity to head to the shop early last weekend to get a few photos of the car with the new livery before it would leave Miami for Las Vegas. 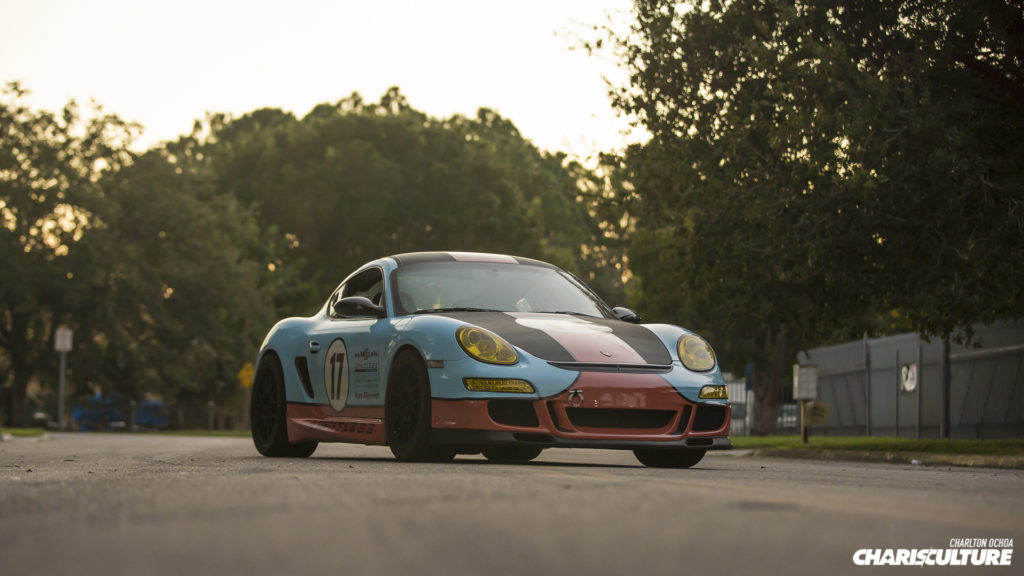 They nailed the design. The car was stunning in person. The Cayman also received a bit of a facelift. 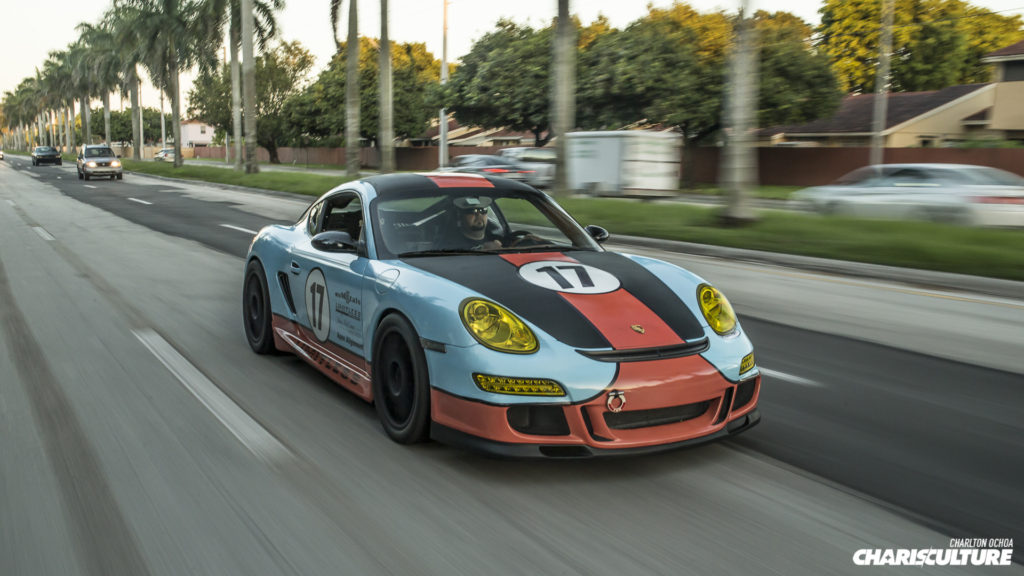 We stayed local to the shop since we didn’t want to risk anything happening to the Porsche and utilized the garage at the local college campus. 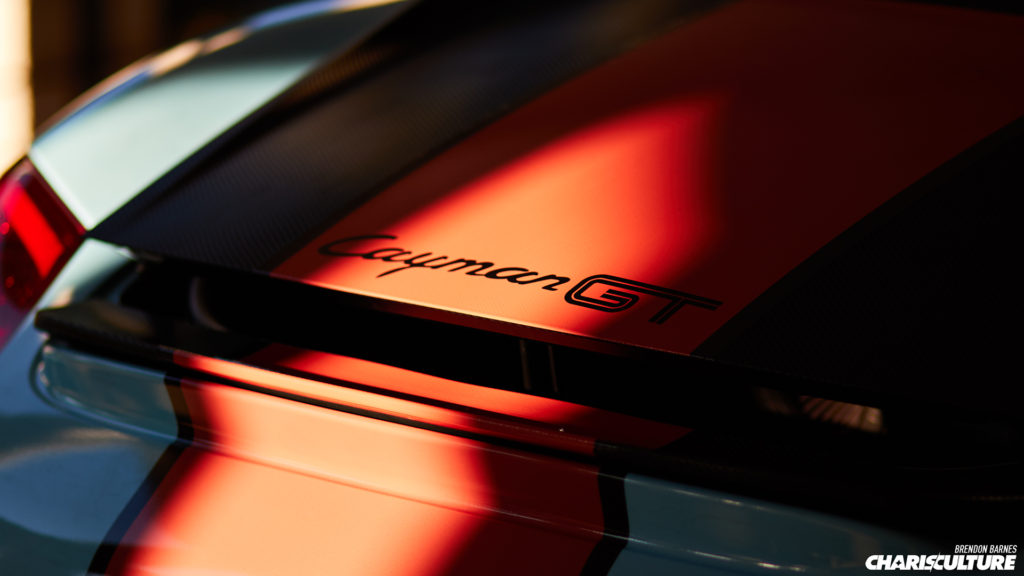 Everyone involved can take pride in this build. This Cayman is the first of its kind but I have a feeling it won’t be the last. 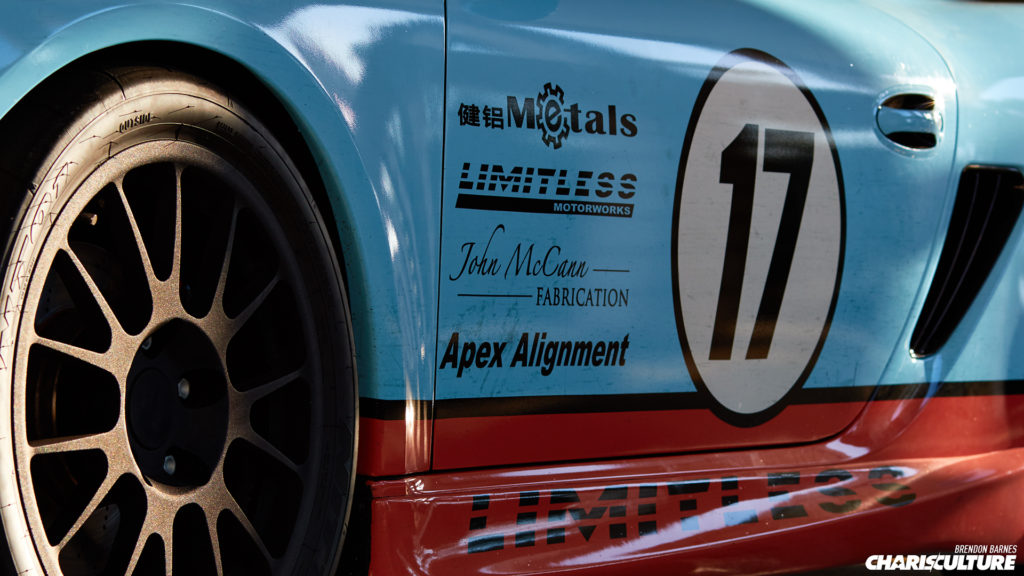 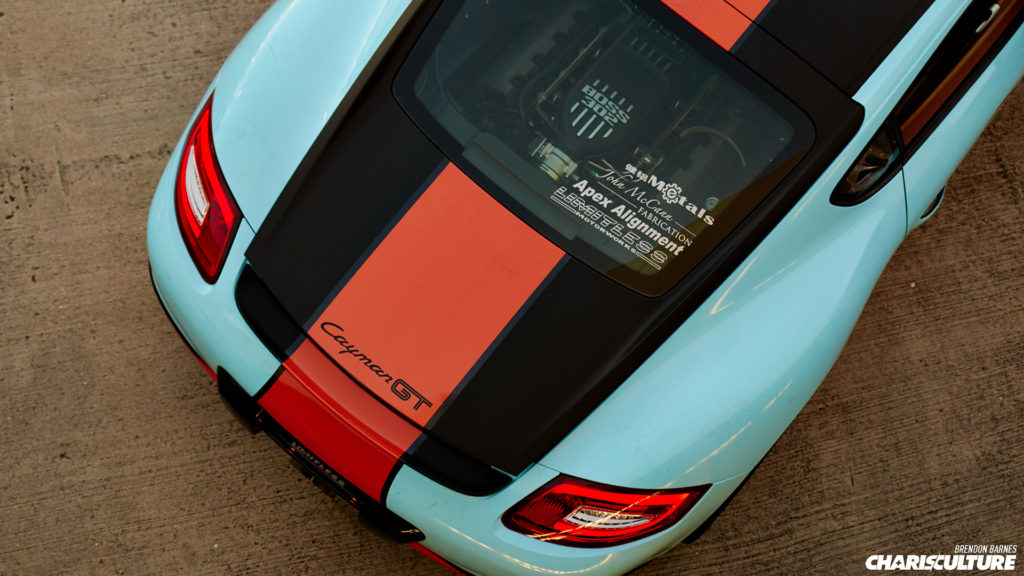 The car sits just right on the KW Clubsports and CCW Corsair C2K wheels. Everything that went into the Cayman is functional. 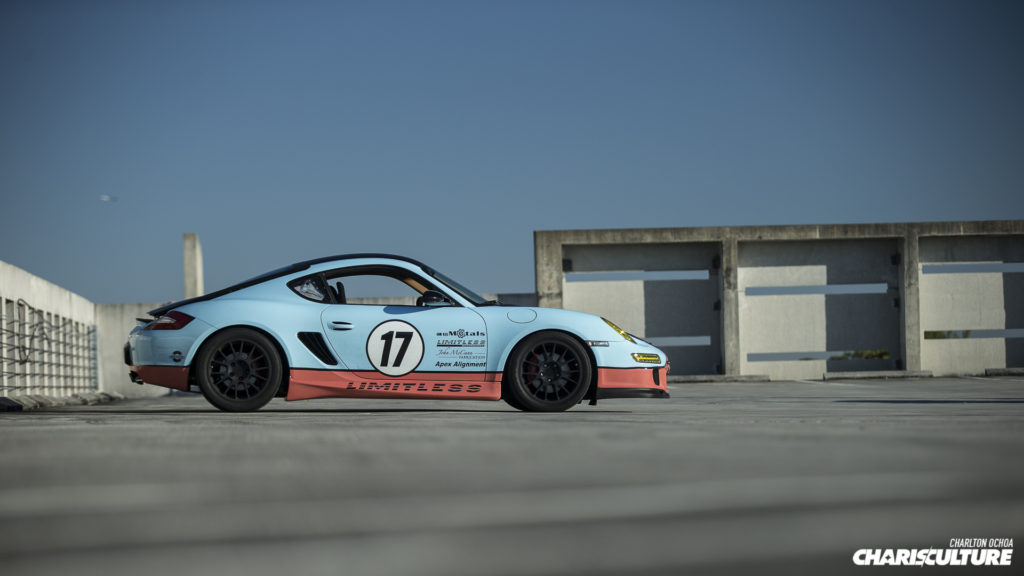 This build is definitely one of the best I have seen in a while. Make sure you come and check it out at booth 61022 at SEMA. 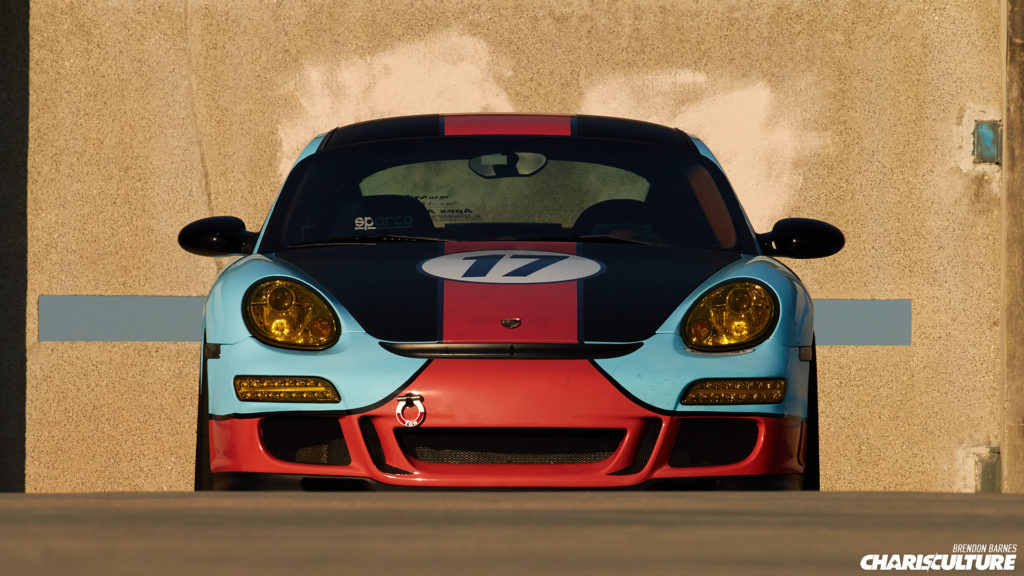 For more photos check out our flickr album Here