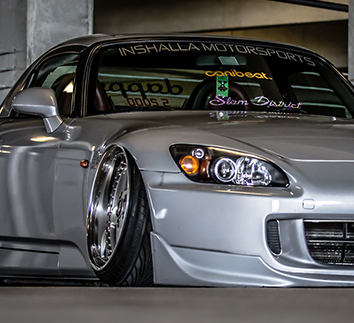 The Nurotag All Stars Show & Meet winter-edition car show, which took place at the Miami Marlins Stadium garage on Saturday, December 7, brought together local winners from previous events and all-around car enthusiasts. While driving around looking for parking near the site, you could hear loud music and find cars still pulling in to the show while others roamed around the area. We didn’t bring our cars to this show, as they are under construction, but it was fun to pass by and kick it with some of our friends who showed up to support. The MKIV Supra is a unique, naturally-wide car, which attracts attention due to its infamous 2jz powerplant and the late Paul Walker’s (RIP) influential grip on the car back in 2001 when Fast and Furious made its debut. Throw an Abflug bodykit with some insanely wide HRE wheels into the mix, and you have an incomparable formula for attention. This kit is the epitome of extreme modification. Along with being extremely rare, this is the first Abflug kit I have ever seen up close. What do you guys think? It seems as if 2013 was the Golden Era of wheels (pun intended). The Sign Savers brought out their BMW 6 series on ADV1 to show off that style. The color contrast certainly is amazing. I can only imagine keeping them clean is quite the battle but well worth it for a finish that is second to none. Our homies over at Eclectic Crew also showed up to hang out by the Stance Miami booth. Ping’s S13 is always an eye-catcher. Every detail from the red volk stickers on his wheels to his “Twerk It, Miley” sticker underneath the rear wing are only a few of the many little things that really make this car a remarkable sight. The Sign Savers at it again. This is something a little larger than just about everything else at Nurotag. Not only is it big, but it’s also bagged and slammed. Granted, I’m sure you can hear the gas disappearing by just turning this bad boy on. It’s nothing short of pure badass. Another local favorite crew spreading their movement across the U.S. is CamberGang. One of their many cars showed up and killed it at Nurotag. This is one of many 350zs pushing the limits of aggressive stance and camber. The Nessen Forged 370z has seen many color combinations – the latest being my favorite. The copper barrels with black center on the car’s naturally black paint is absolutely wicked – just another bagged Nissan that everyone had to stop and take pictures of. Nessen really puts out an amazing product for those who want something different and have the cash to back it up. Not everyone is into the aggressive camber movement; however, it is a style that seems to be here to stay. This Honda S2000 was another solid example of the movement. It’s something you either love or hate but ultimately cannot ignore when passing by. The excessive camber while popular isn’t on every car at this show. Alex Bauza’s S15 has been one of my favorite cars for a while now. The color contrast, the car itself, the SSR SP3s – there isn’t one part of this car we don’t love. Unfortunately, the spacing at the show didn’t allow for pics from all angles, so if you would like to see more of this amazing s15, check out our Autocon Miami post from last week. Simple a 1982 Toyota Starlet – Built 2.0 3SGTE Engine with a Garret GT42R Turbo. Here’s one of many gems I was very excited to see throughout my The Nurotag walk around. PSI Racing brought out their 1000hp, 7 second 1/4 mile. We are working on possibly putting together a nice shoot for this ride, but for now, just enjoy this view because it usually shoots by a little too fast to grasp.