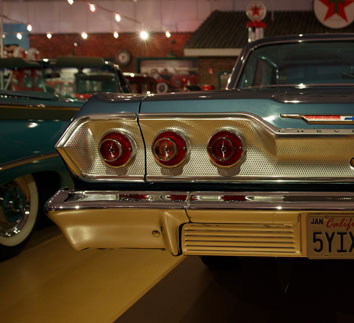 My Grandfather Eddie loves Cadillacs but not as much as The Dauers. For his “39th” birthday, my sister Allie thought it would be great to surprise him with a private tour of The Dauer Classic Car Museum, and her friend’s fiancé’s father just so happened to be Dr. Dauer, owner of Museum. So Grandma Antoinette, Eddie, Allie and myself headed on over to the museum – in Eddie’s Caddy of course!

We arrived at an empty parking lot in west Sunrise, which felt like an industrial shipping area. As we walked up to the door of this massive warehouse, Ann and Eddie were still trying to figure out where we were going. As we approached the front doors, we could see a few cars through the darkly tinted windows. The look on Eddie’s face was priceless as he peered through the glass at a white 1957 Ford Thunderbird positioned under a mural title “The Fabulous 50s”. 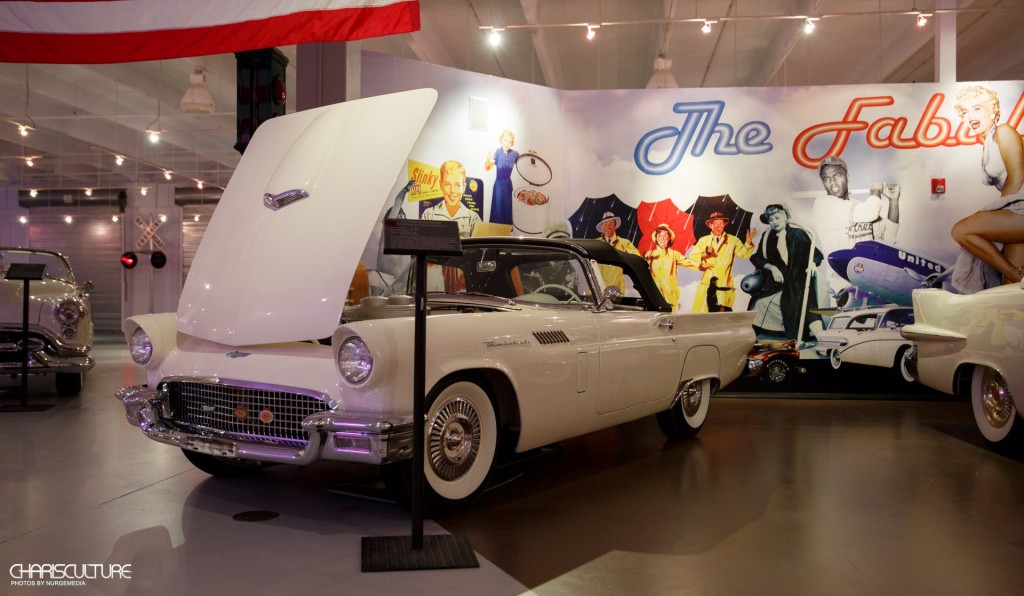 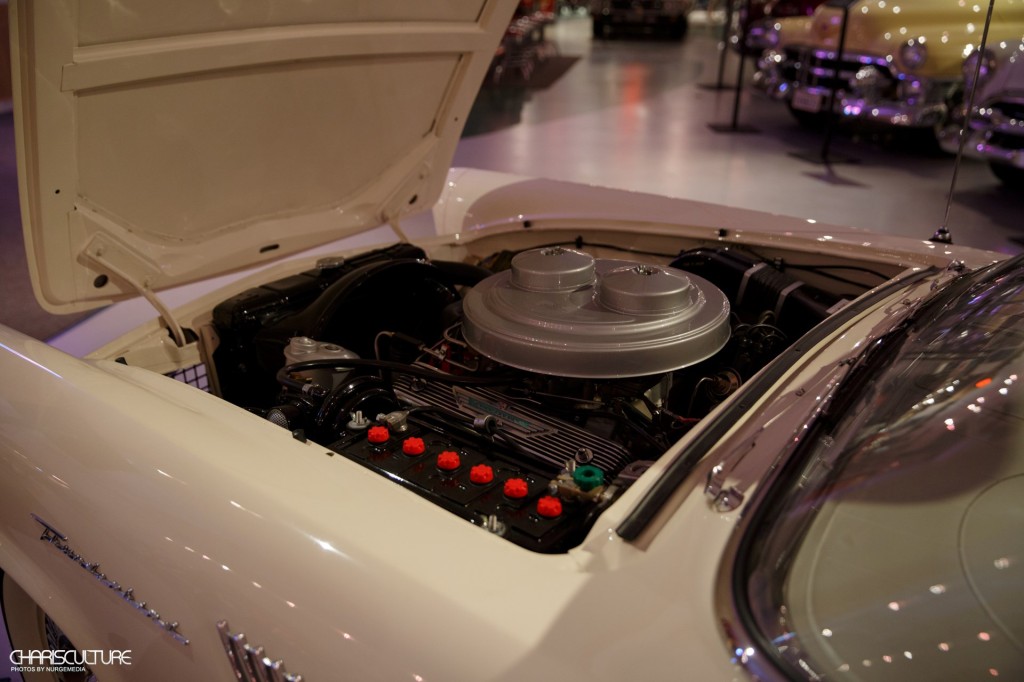 Ann immediately turned around and said, “I knew it! It was something to do with cars!” At this point, the doors had opened, and we were greeted by Ryan Dauer and Laura soon-to-be-Dauer. We were surrounded by Cadillacs of the “Horseless Carriage Age” as we entered the Museum. 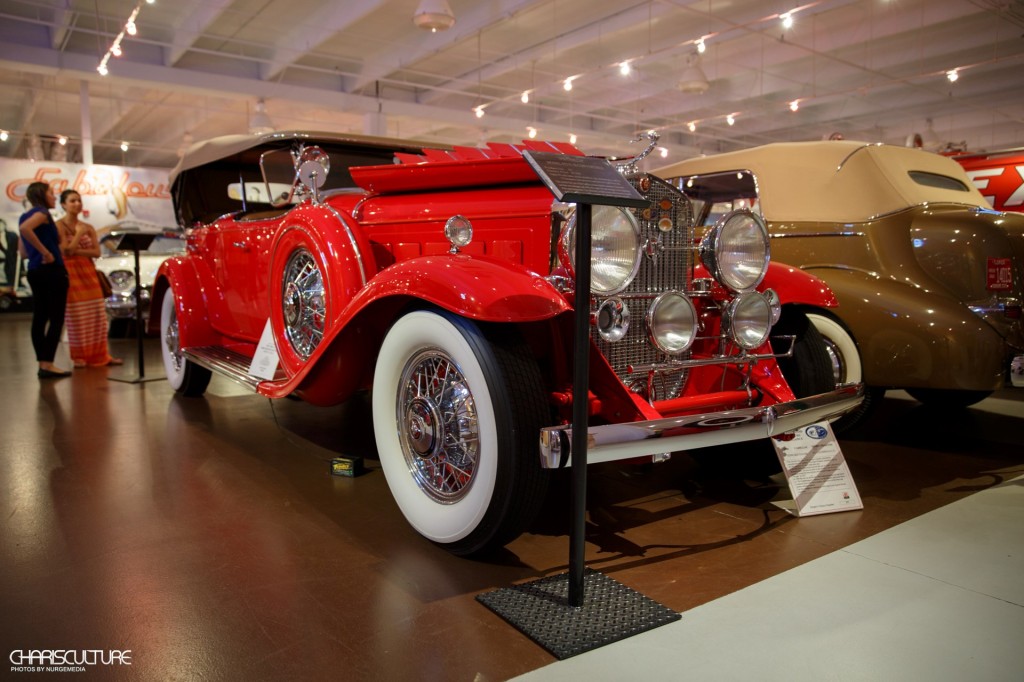 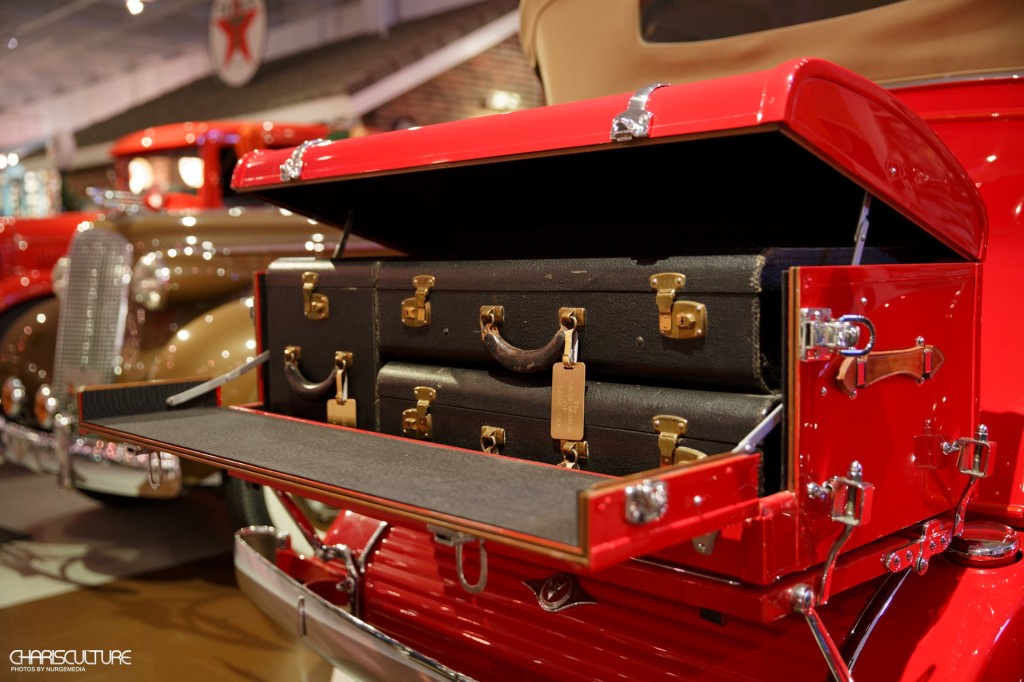 Ryan started the tour with the 1930 Model 452 V-16 Convertible. Apparently opulence was measured by the amount of headlights you had back then. This car nailed it, especially when it was selling for $6,500! 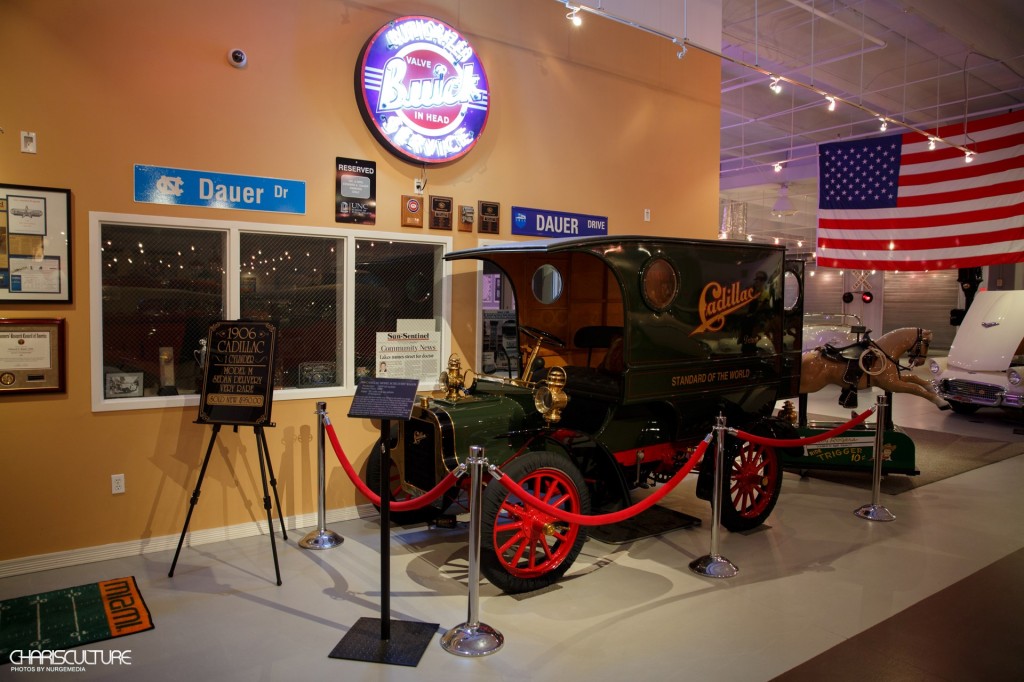 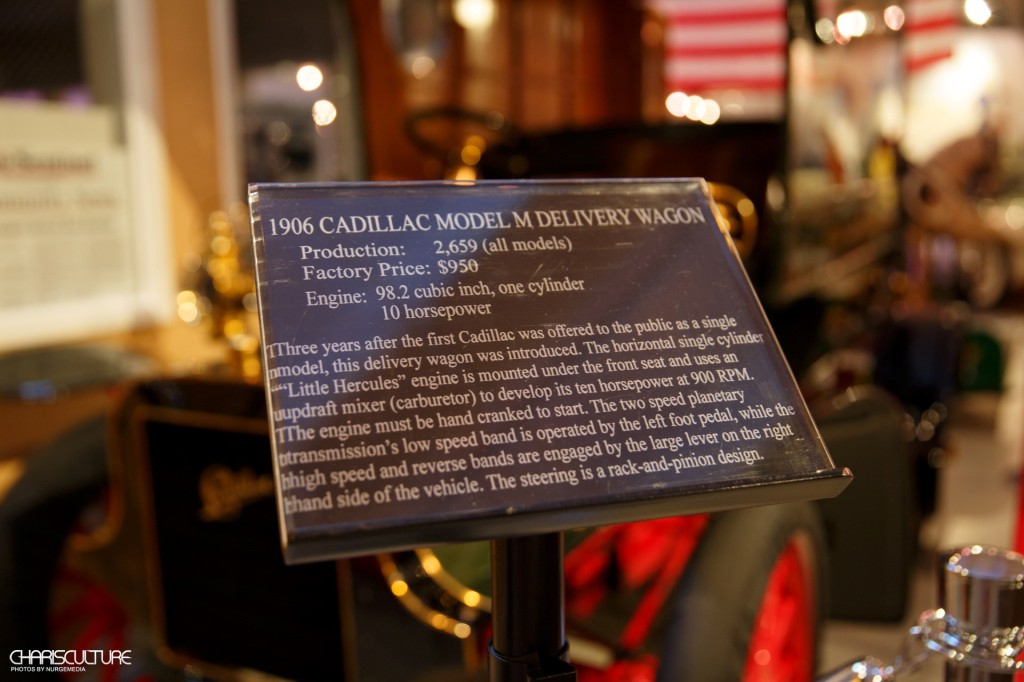 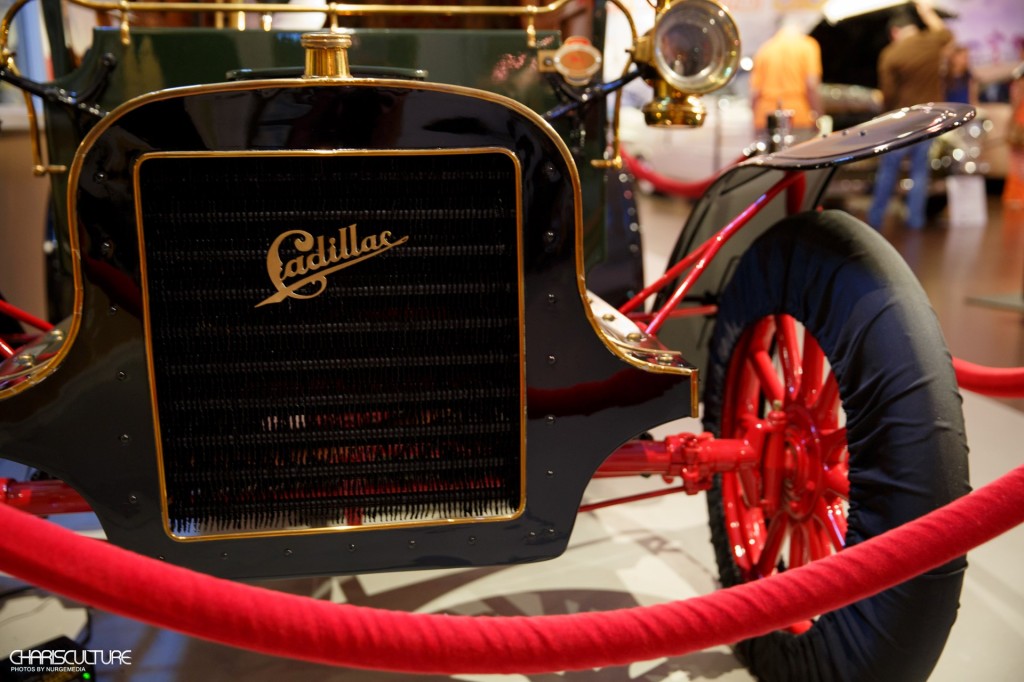 This delivery wagon was introduced three years after the 1st Cadillac was offered to the public. The engine made 10hp @ 900rpm and had to be hand cranked to start. 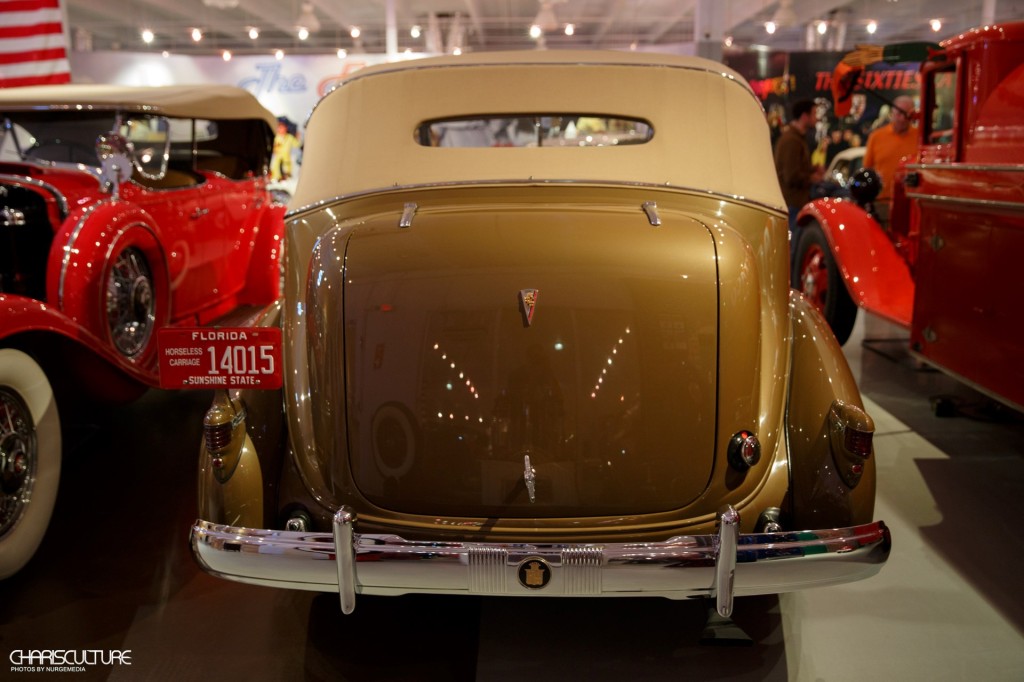 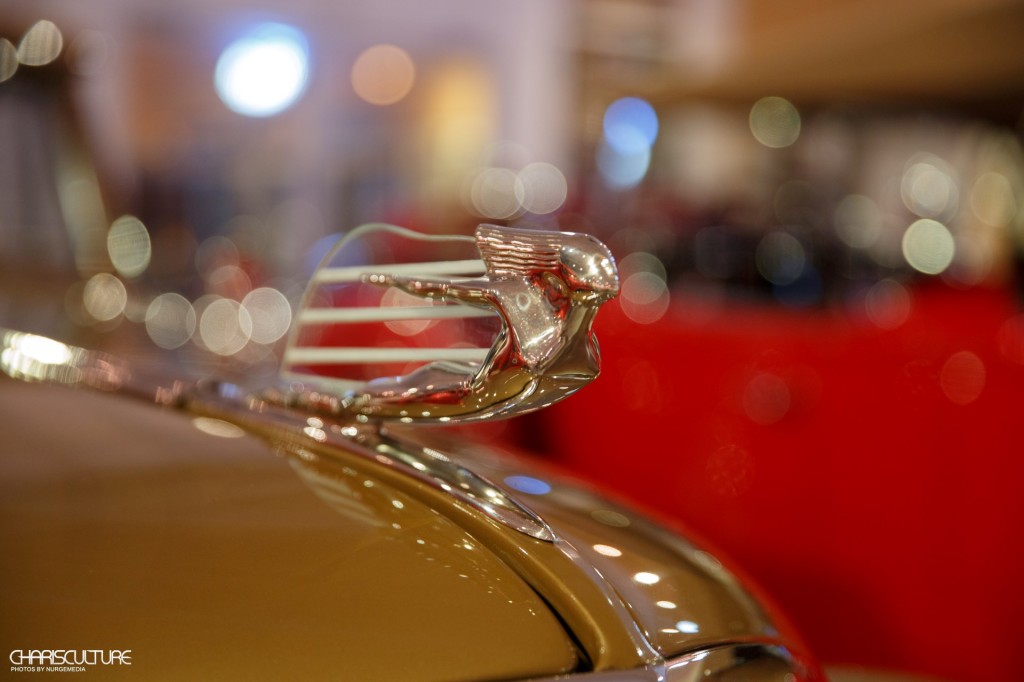 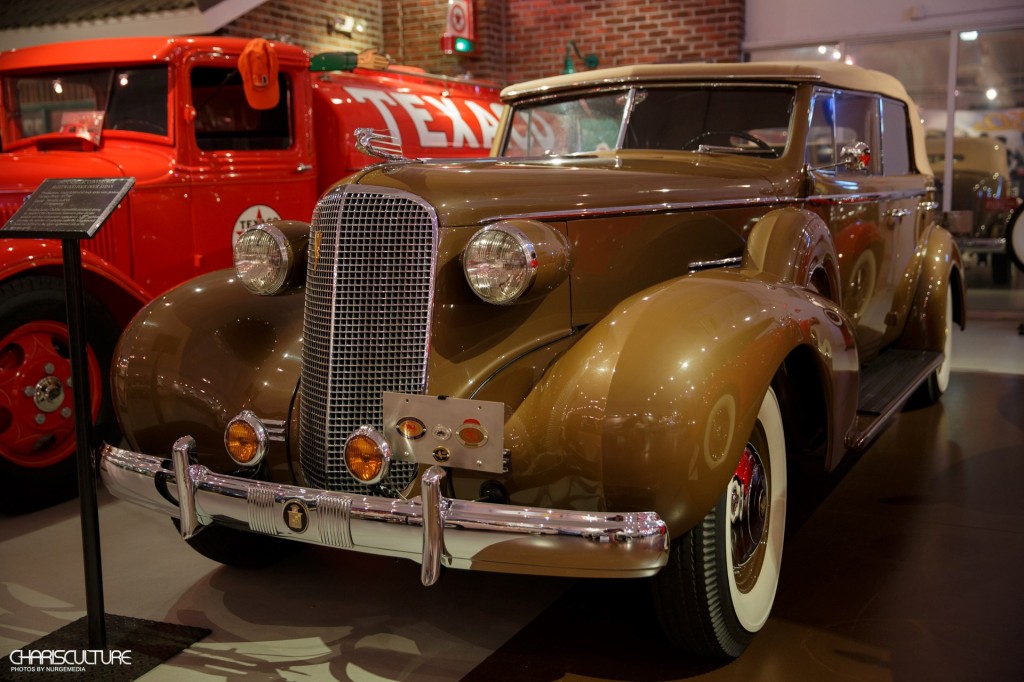 his 1937 Cadillac Convertible Fleetwood Four Door Sedan was produced at the height of the Depression and sold for $3,730. (Under 9,000 of all body styles were produced.) 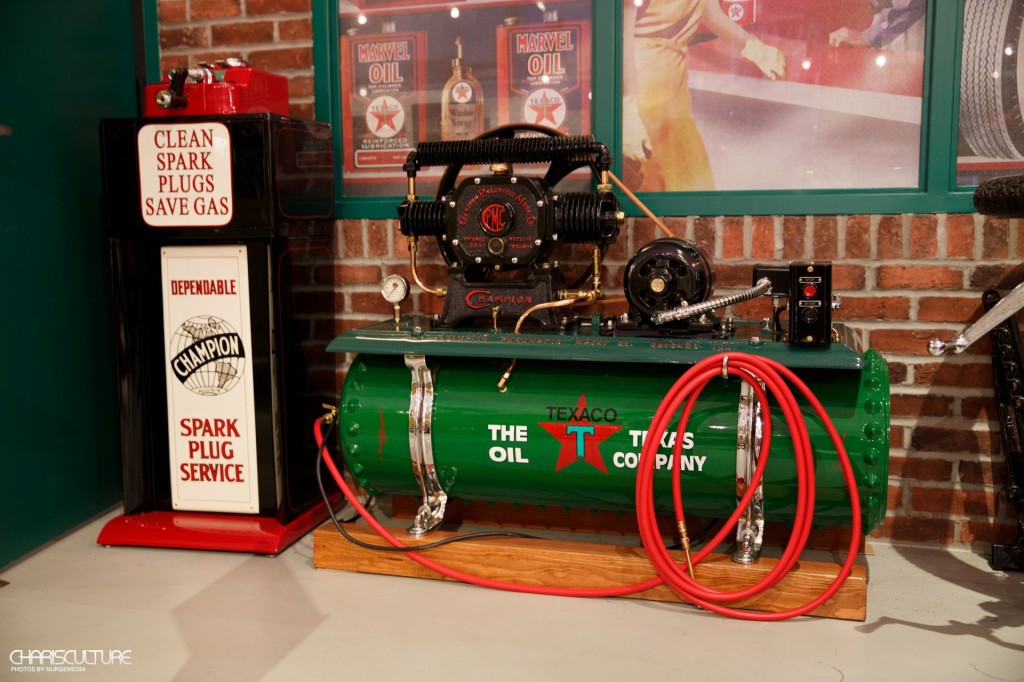 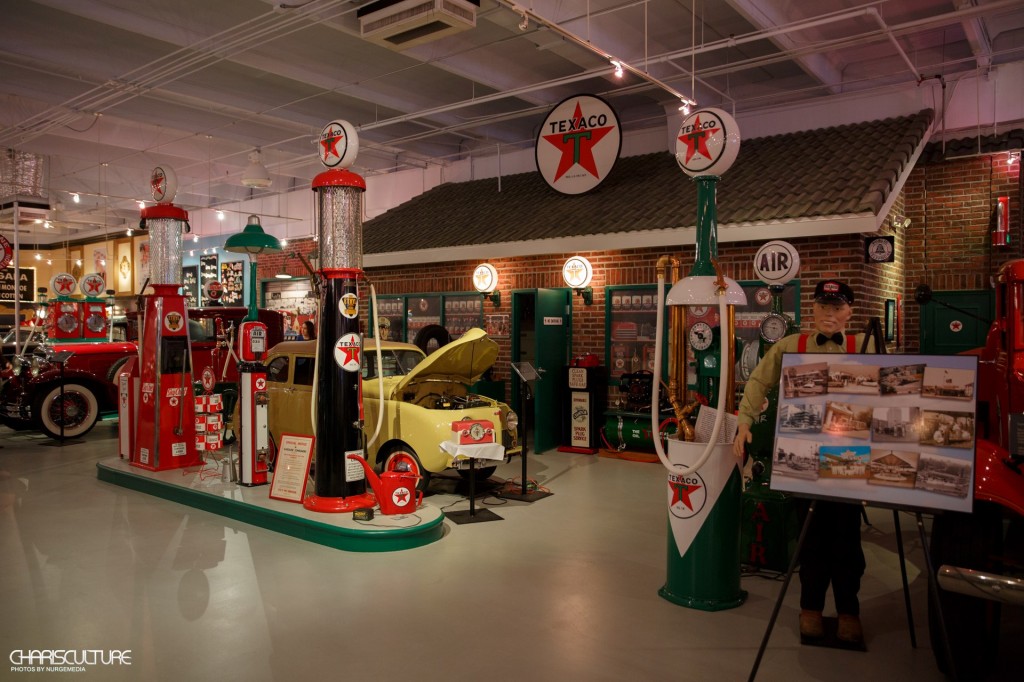 Yes, this place is massive. There is a replica Texaco station inside and we had only walked about 10 feet!

It had pretty much everything you would need to service your 1930s vehicle. 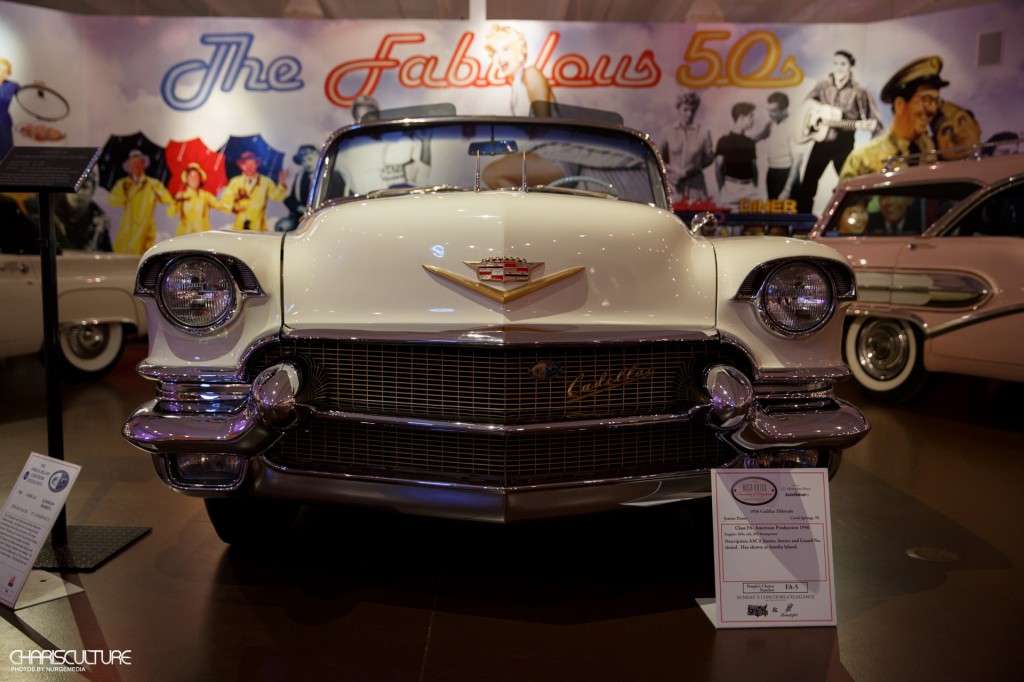 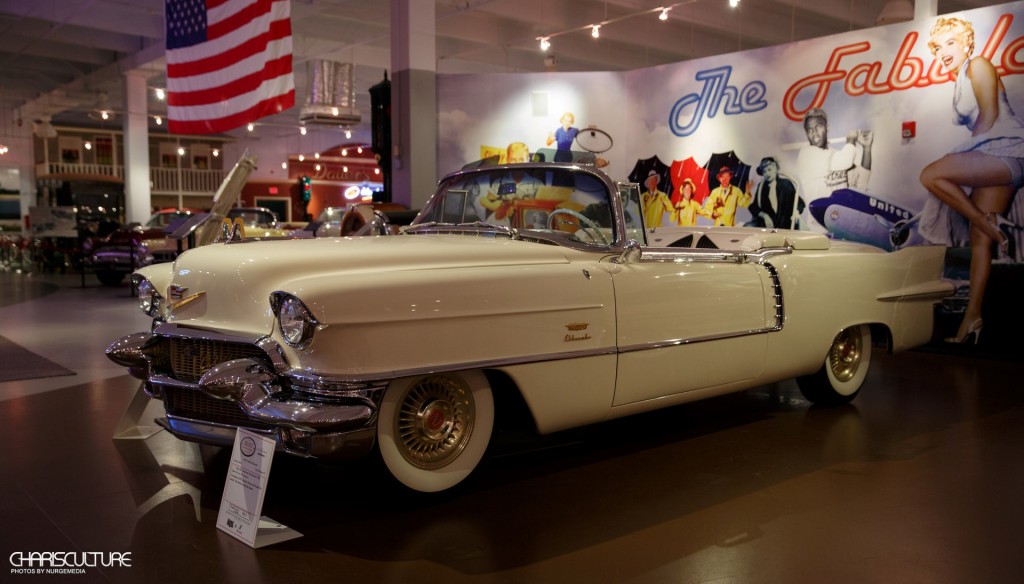 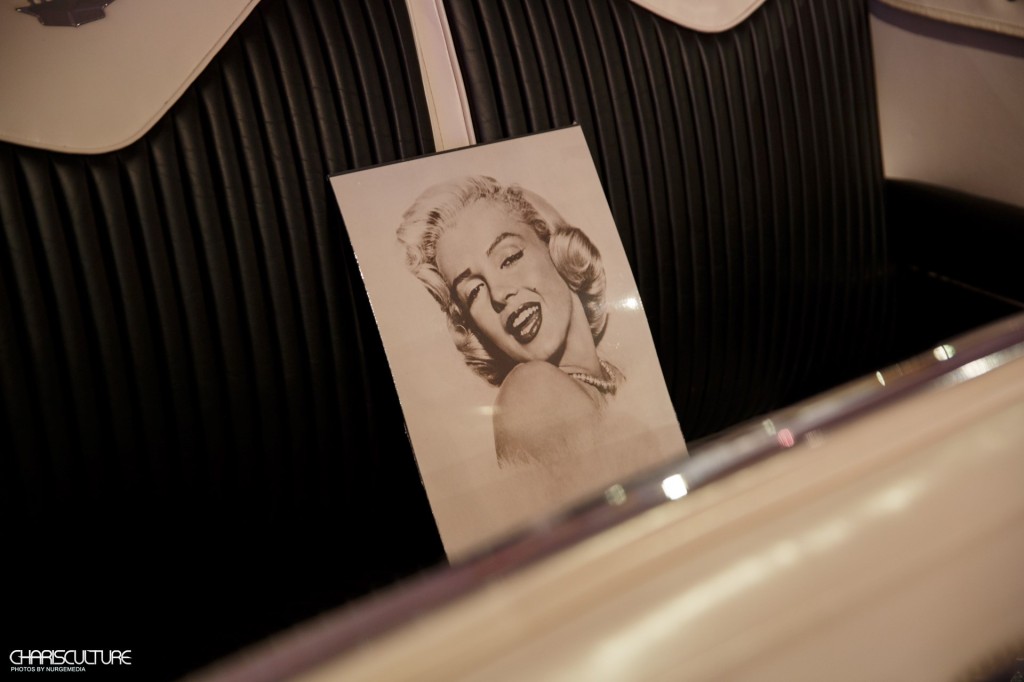 Why is there a picture of Marlyn Monroe in the back seat of this 1956 Eldorado, you ask? Well, apparently, when this car was being restored, her driver’s license was found buried down in the back seat! 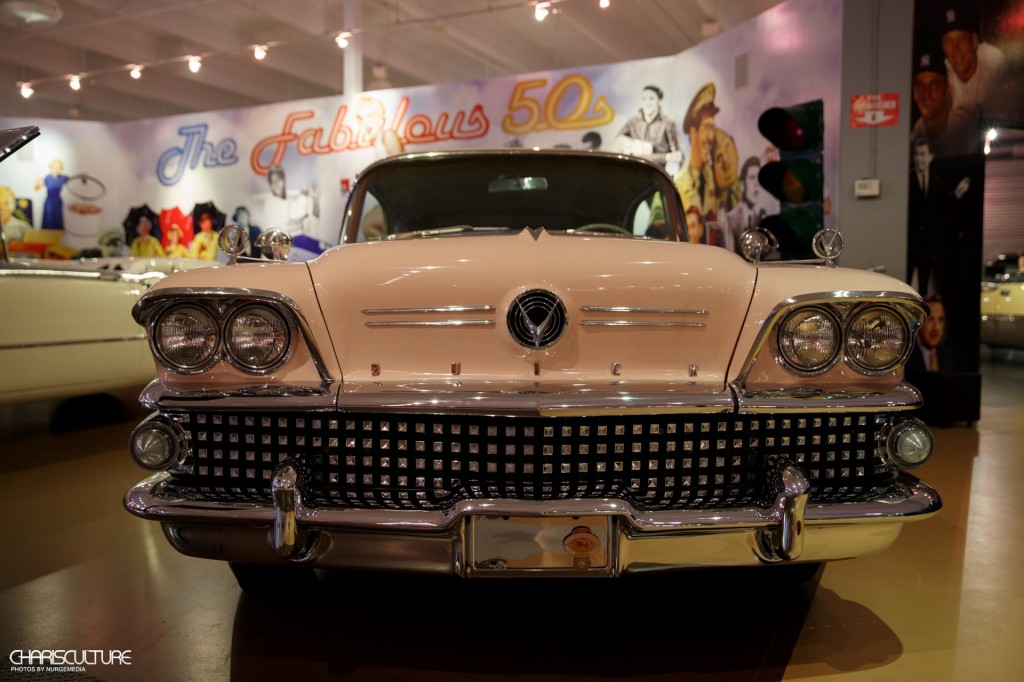 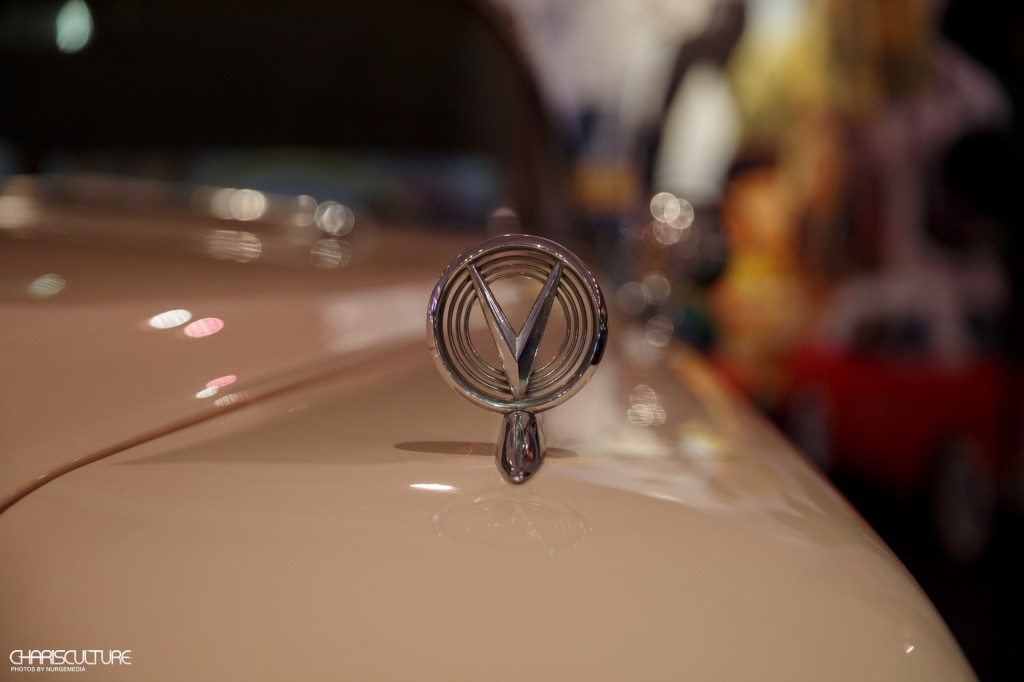 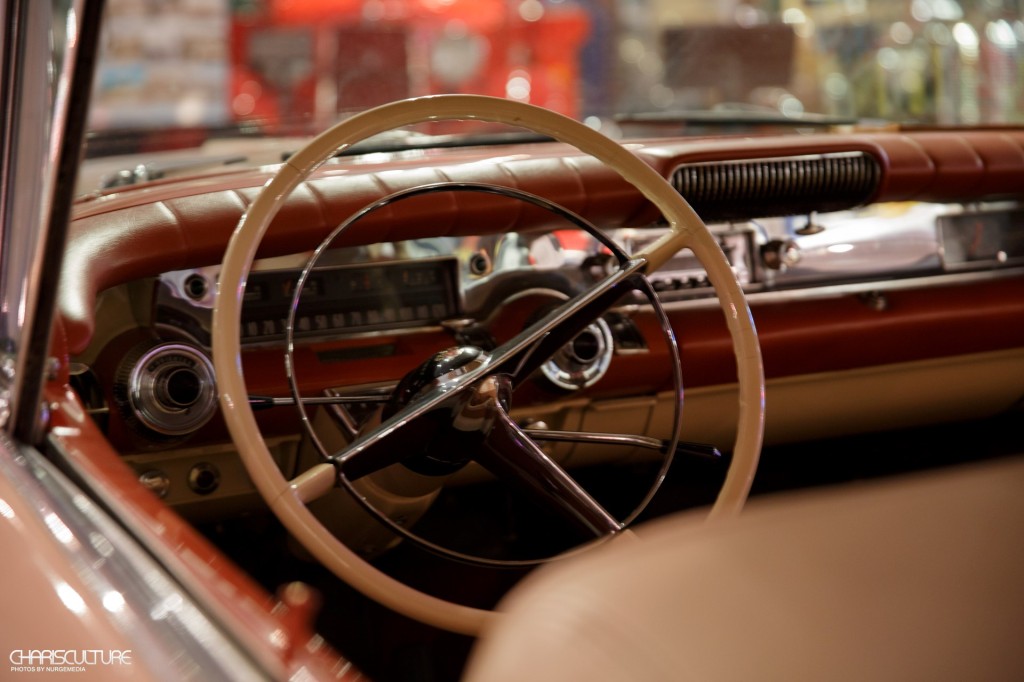 This 1958 Buick Roadmaster Convertible was designed with the maximum amount of chrome ever used on any production passenger car. 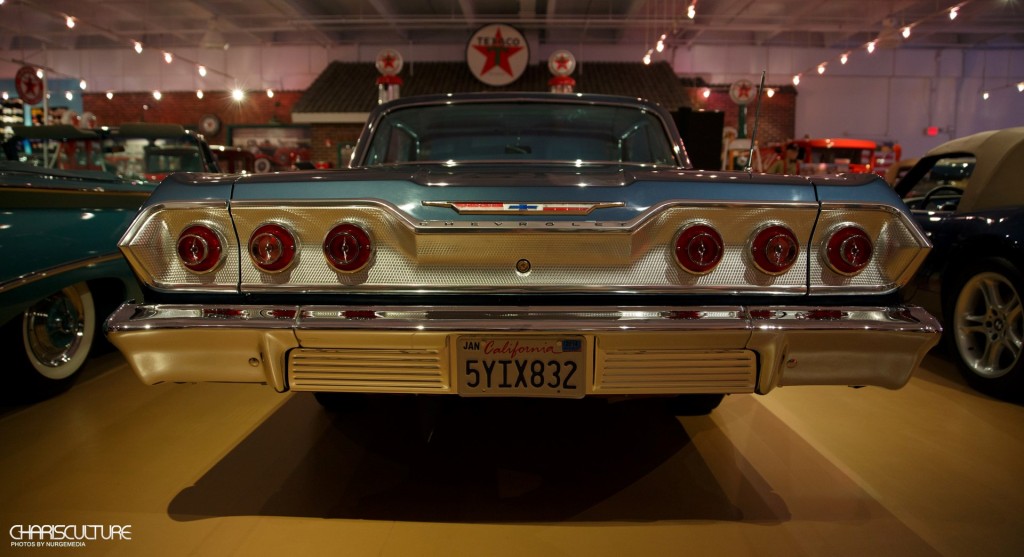 Growing up reading Lowrider and being exposed to all types of classic cars on hydraulics, I was overwhelmed seeing a 1963 409 Impala devoid of airbrushed Aztec temples with wolves and half naked tribal women. This car was immaculate. 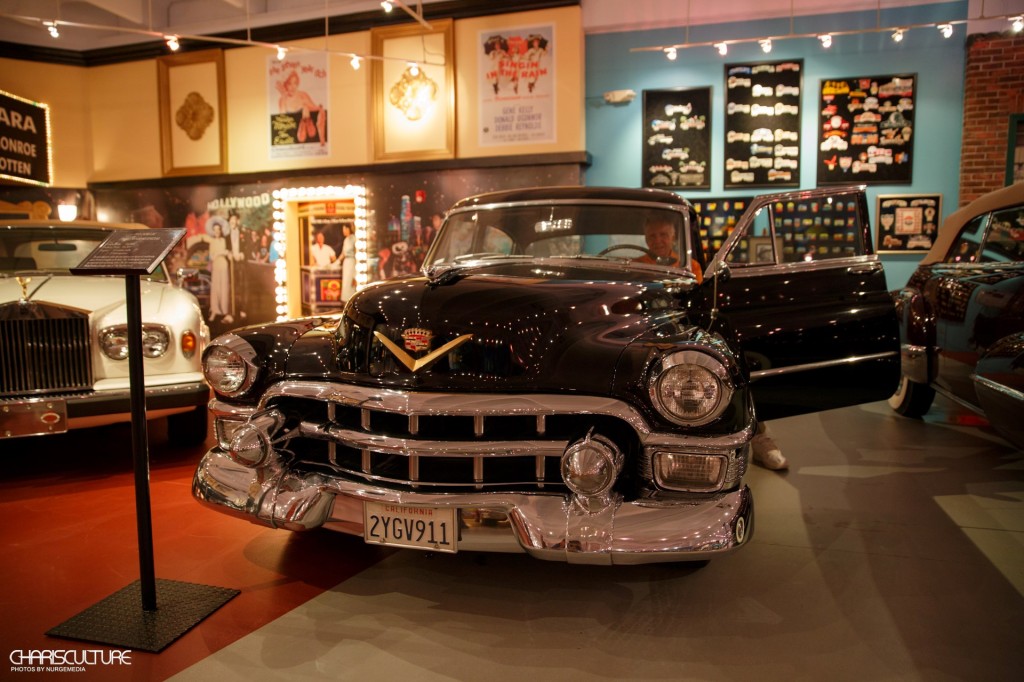 This 1953 Cadillac Fleetwood Special was one of Eddie’s favorites. As you can see, he was pretty excited to sit in it! 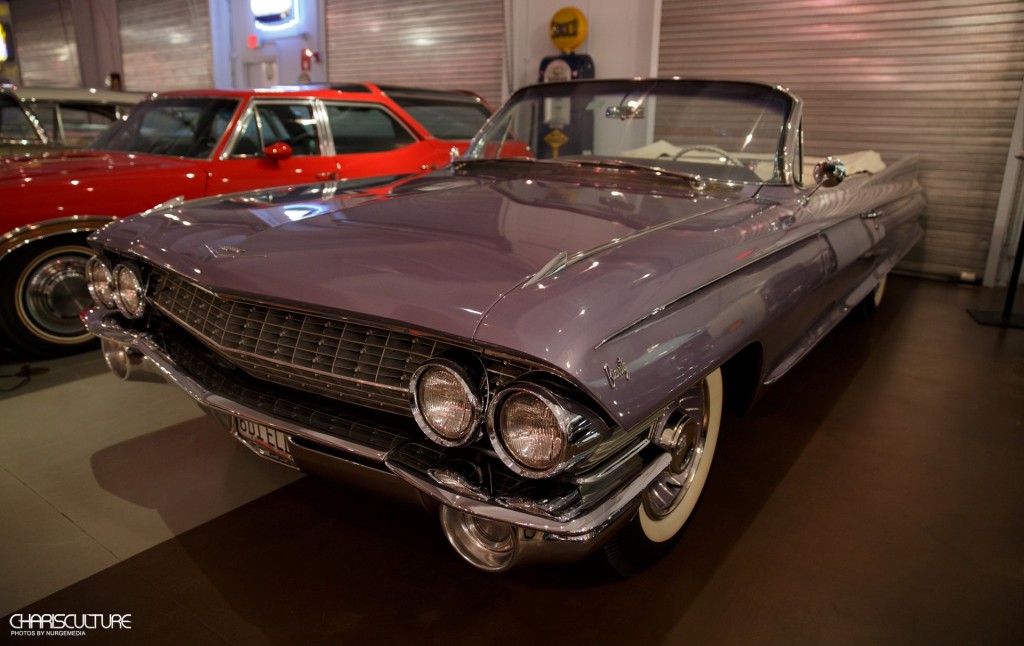 This paintjob stopped me in my tracks. What’s more is that it’s a factory color! This Biarritz also had white leather Ostrich interior and is also a weekend favorite of Dauer Senior according to Ryan. 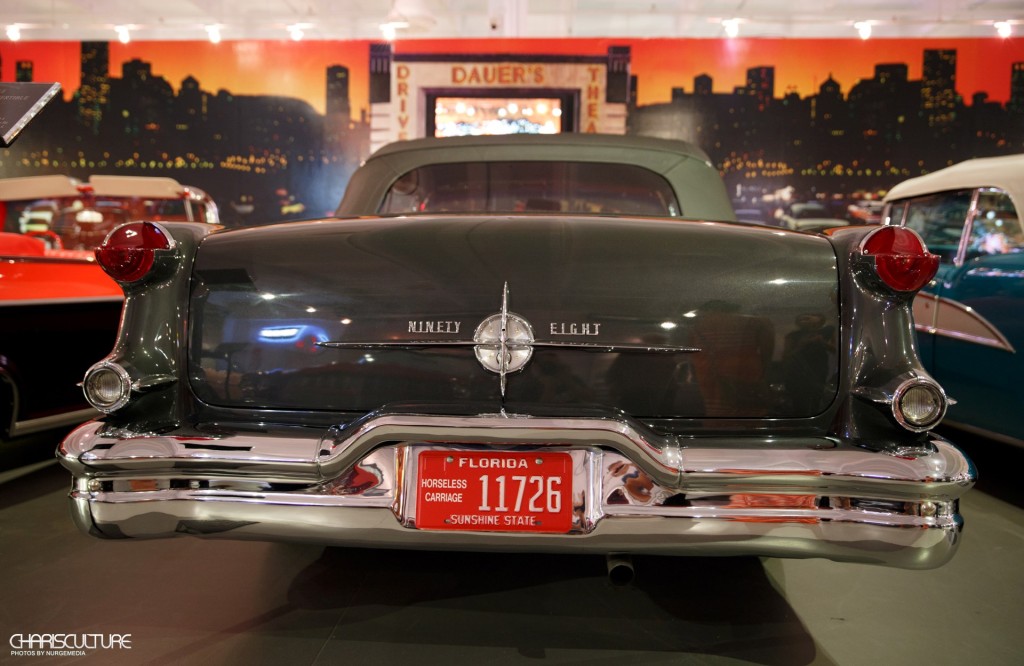 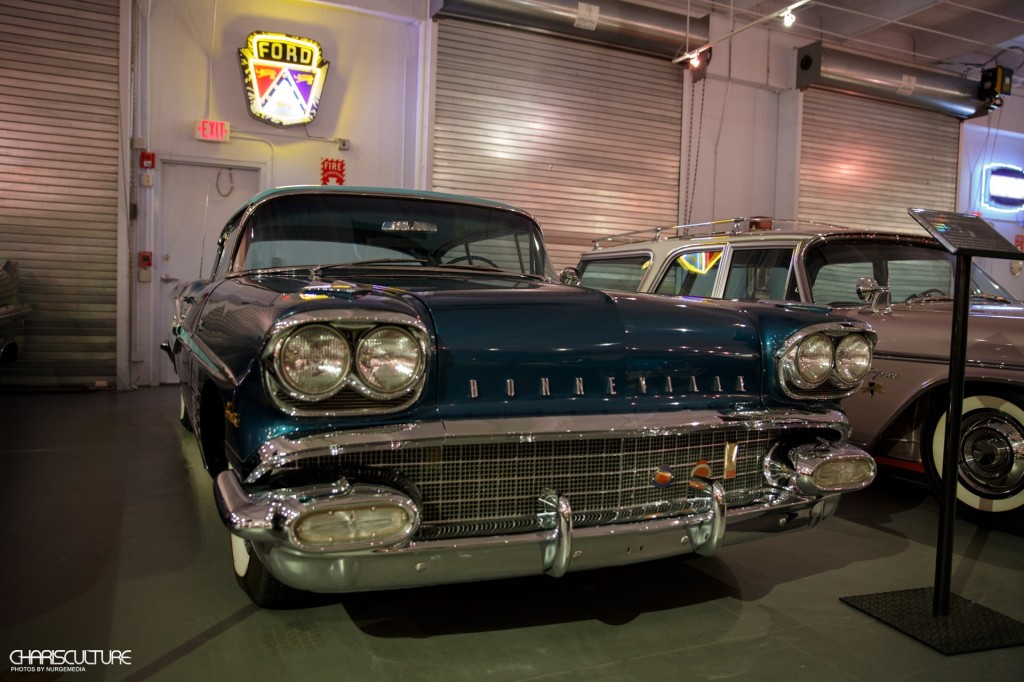 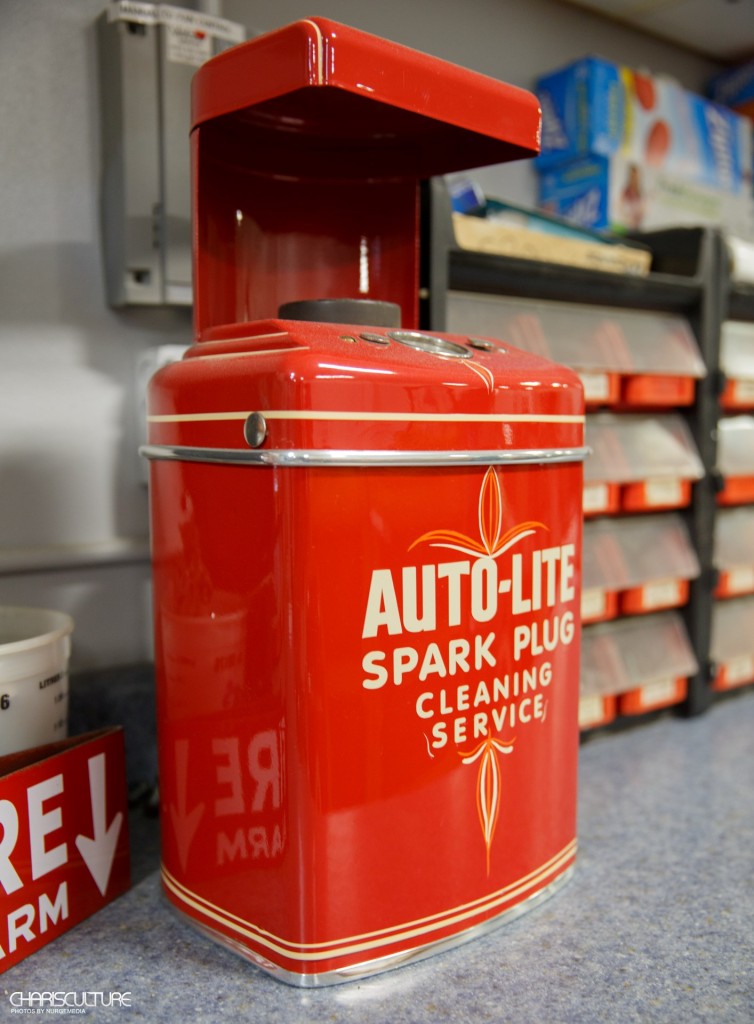 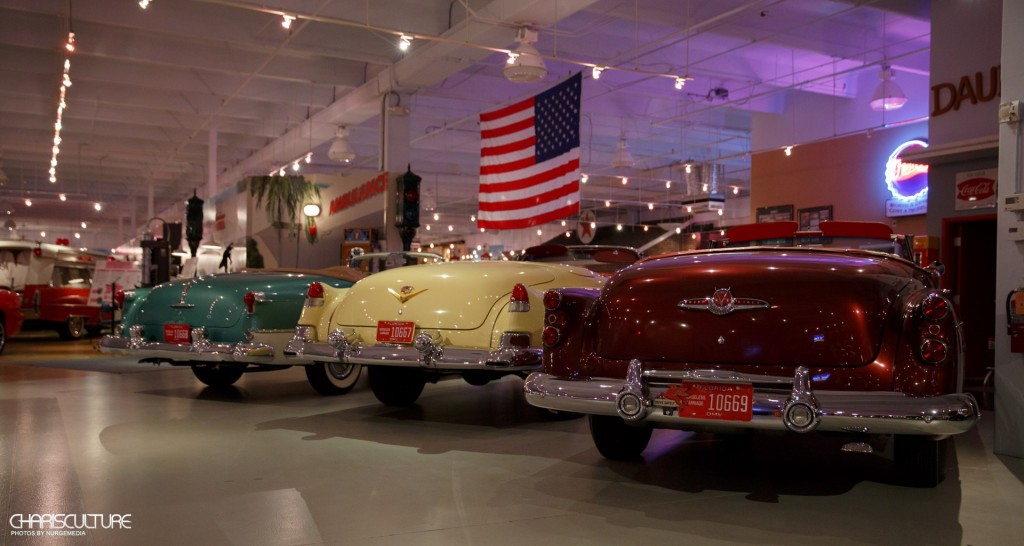 I had no idea what I was looking at until I started to read about each car on its plaque. That’s when Ryan walked over and started to tell us about the Triple Crown. The Triple Crown is comprised of a low-production 1953 Oldsmobile Fiesta Convertible (left), 1953 Cadillac Eldorado Convertible (center), and a 1953 Buick Skylark Convertible (right). Having all 3 of these rare gems constitutes a rare achievement of historic significance in the GM timeline. They represent a part of GM’s Golden Anniversary. The production numbers were so low on these vehicles because GM was using them as prototypes to see if the public would like them. Apparently, they sold so well that GM decided to put these vehicles into mass production. 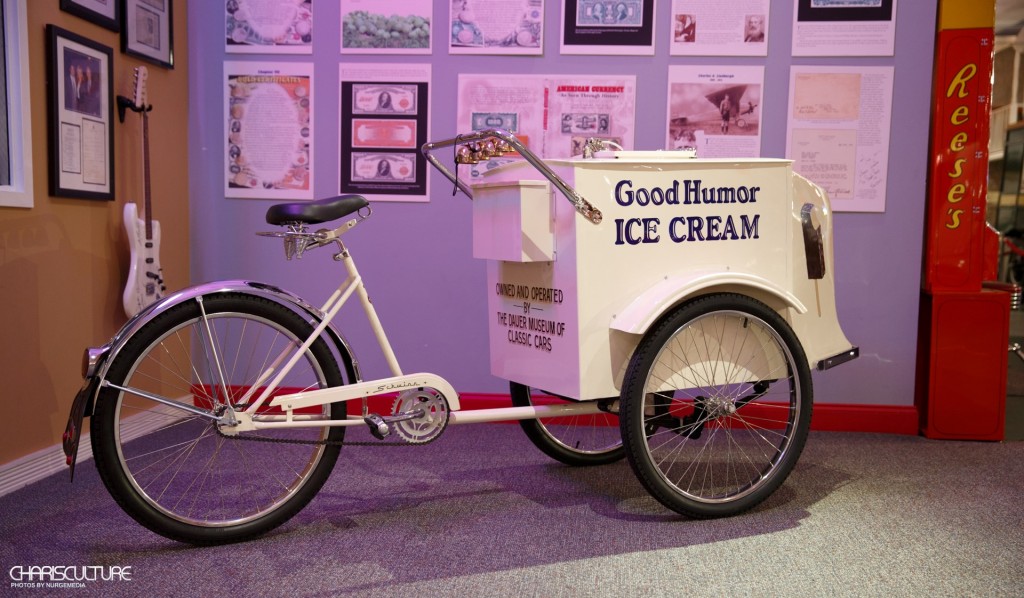 We walked around the museum for almost an hour, and to be honest, I was not prepared for what I experienced.

I walked in and immediately started taking pictures like a madman. After the first twenty minutes, my sister yelled to me from across the museum to catch up. I was missing the tour. So I thought, “Screw it. This is an amazing opportunity, and who knows if I’ll ever be able to do again?” So I ran to catch up with everybody and enjoyed the tour snapping pics here and there. I’m happy with what I got, and I’m glad I stopped shooting when I did to enjoy the tour and the amazing experience. I can’t thank Ryan and Laura enough for bringing us in to enjoy an amazing collection of very personal and exceptional cars.