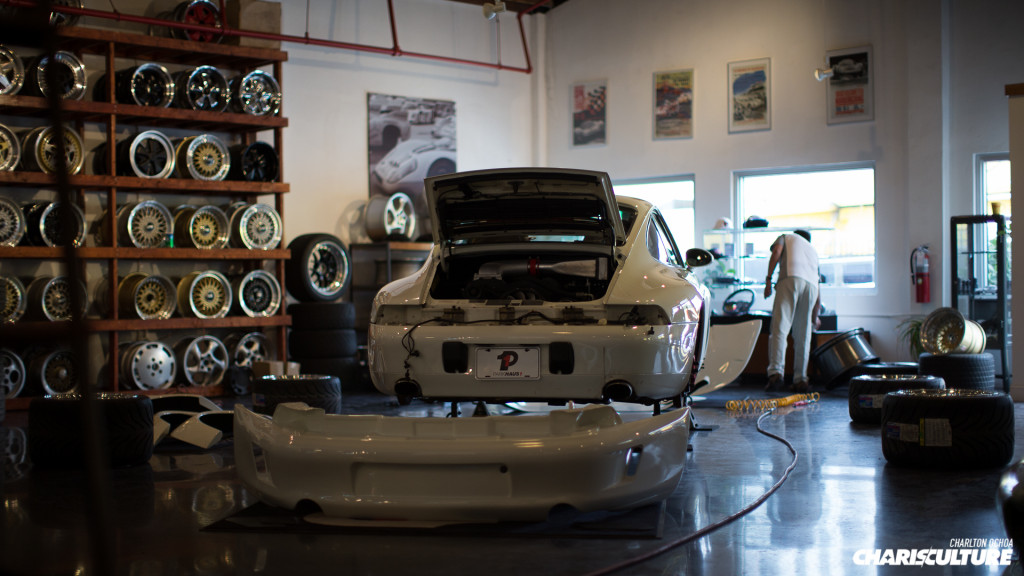 Being a Porsche guy at heart, seeing Nakai-San work in person was quite the interesting experience. I grew up around front-engine Porsches then moved on to finding love for the rear-engine machines. I moved on from owning them to getting into the JDM world, but they always had a special place in my heart. I fell in love with the first RWB I saw online because, for as crazy and significantly wider as it was, it almost felt as if that’s the way it was meant to be at the same time. 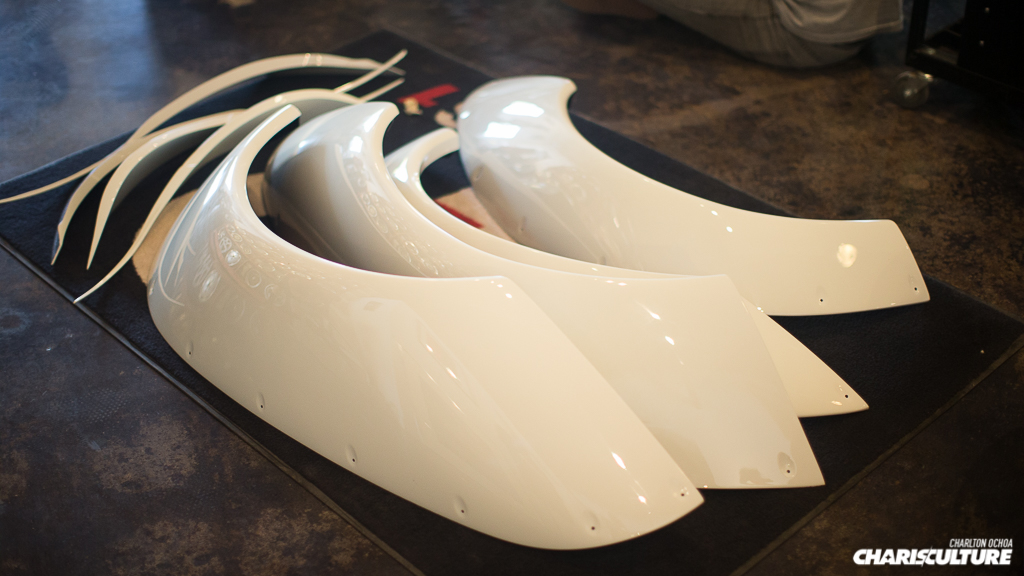 After being involved with this for many years now, I feel as if I have been caught in the middle of the RWB explosion in the States. I’ve come across many of his builds when traveling to the West Coast; however, having the ability to watch him work firsthand was something I was always interested in, and this was my chance to do so. 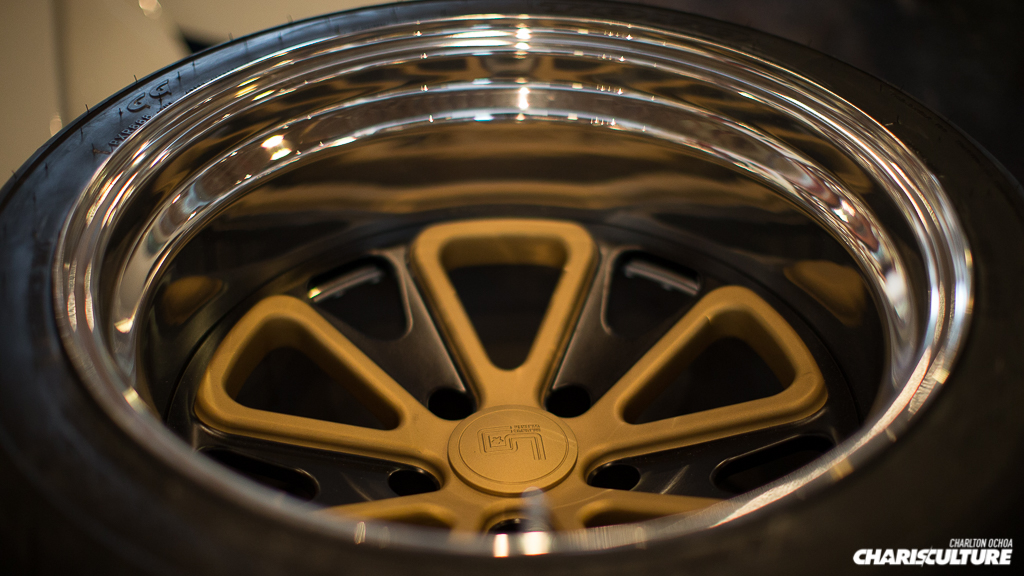 This particular build was a stunning 993, which many consider cutting up sacrilegious, and shying away from the typical insane offset Work Meisters, they decided to go with a set of Magnus Walker Concave Outlaw wheels by Fifteen52. These particular wheels were actually ‘01’ off the production line, and, as you can see, without the Nakai touch…well, I don’t think it would’ve worked out. 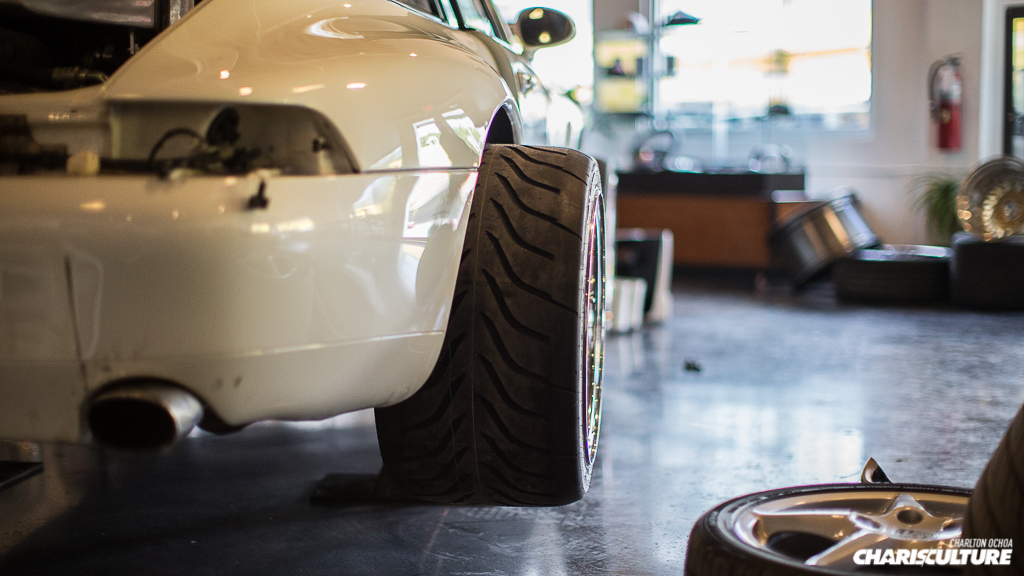 It’s one thing seeing them finished, but seeing the extremely aggressive offset applied without the kit, that’s when you begin to understand how drastic of an addition it is. 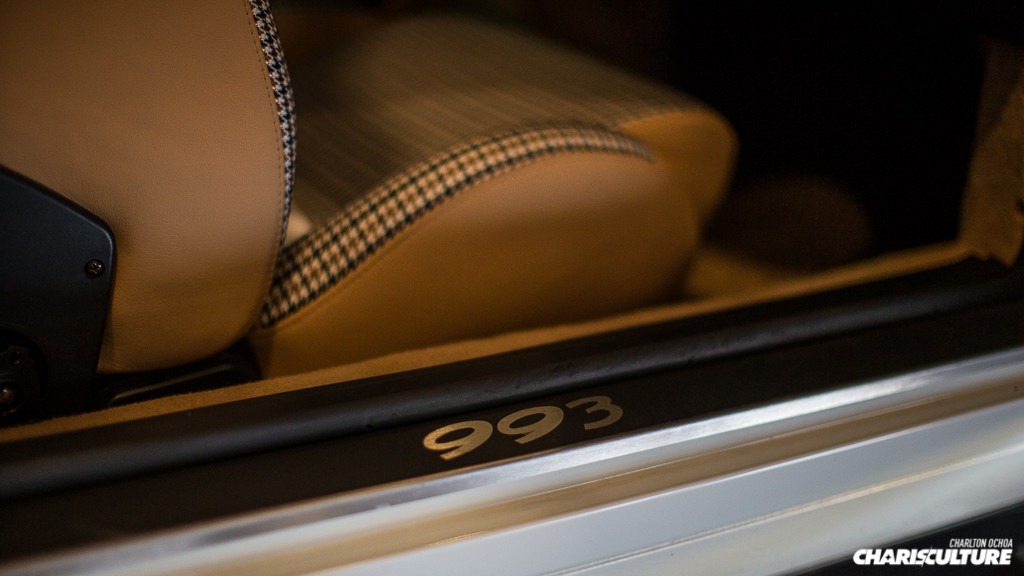 The interior of this car was gorgeous. So, the color of the car, alongside the wheel style and color, looked perfect. 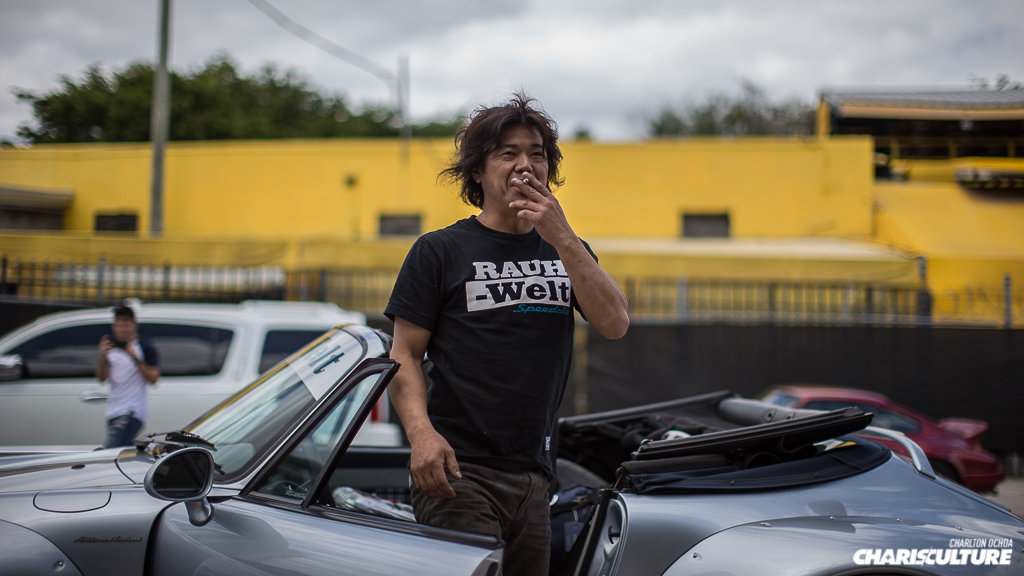 The car, prepped with everything taken off, the kit laid out all around the car, and spectators waiting to see Nakai go to work. Of course, you practice what you preach, so Nakai pulled up in his East Coast cabriolet, which we will get into later. 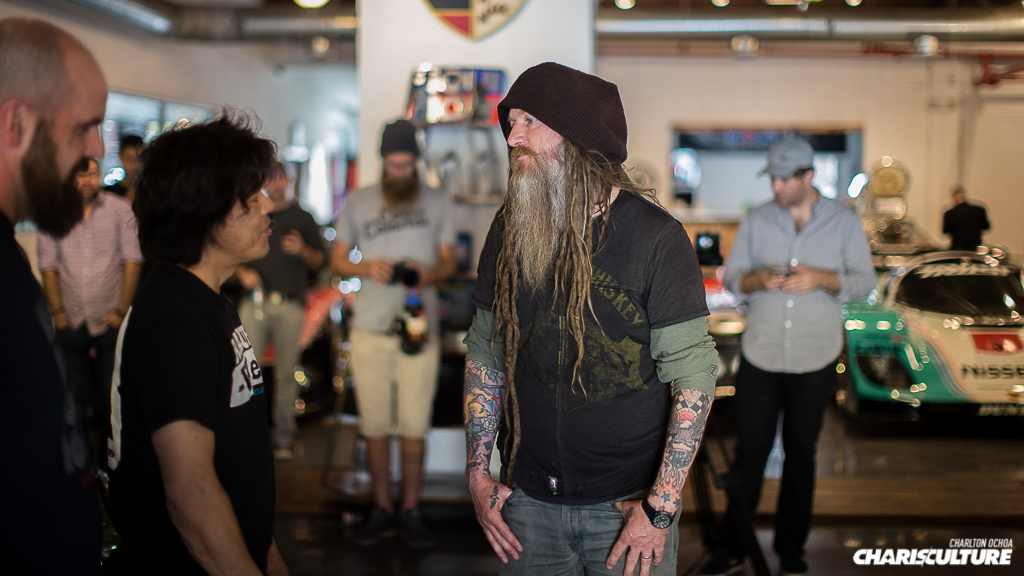 Magnus Walker, another individual known in the Porsche community was also hanging around waiting for Nakai. Walker spent the weekend in South Florida mingling with the locals, Porsche owners and spectators alike for Das Renn Treffen, a large South Florida Porsche gathering. It’s pretty cool to think that this one brand brought two people from completely different parts of the world to this one venue. That’s the value of our automotive passion. It’s our language. 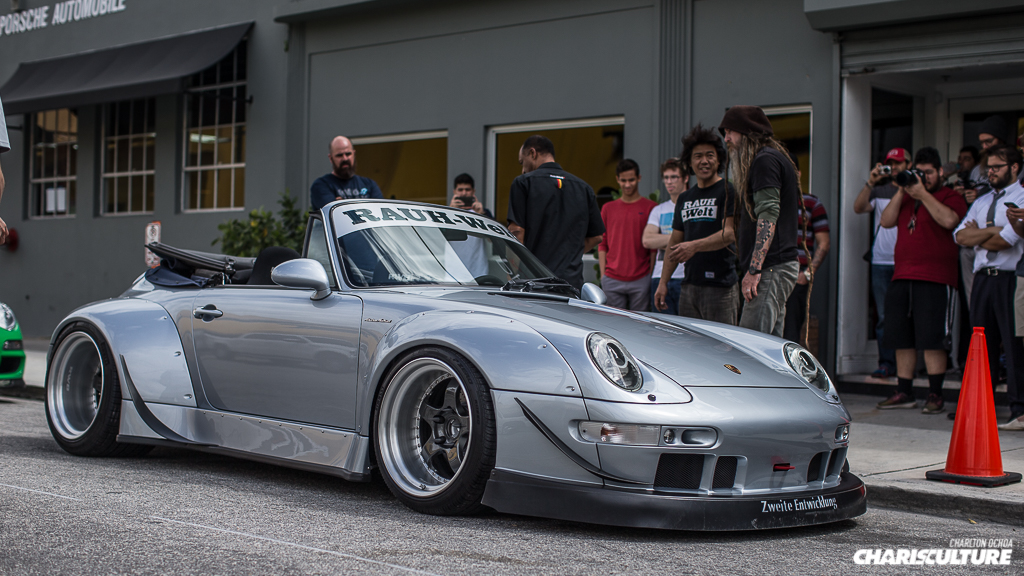 Forgetting about the 993 that was about to lose it’s original lines and never look back, Nakai-San’s personal car drew attention from everyone, including Magnus. You don’t see many Porsches go far away from the production standards, particularly the cabriolet. I was always a fan of the hardtop on any model, but if there was another I wouldn’t mind having, it would be this one. 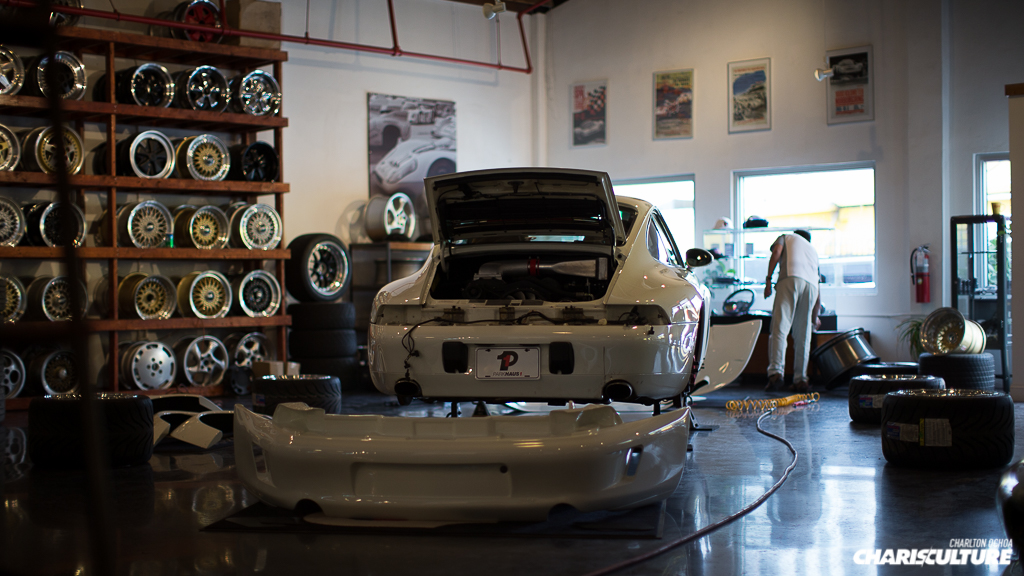 As Nakai makes his rounds of saying hello to the community, the car is inside ready to undergo surgery. 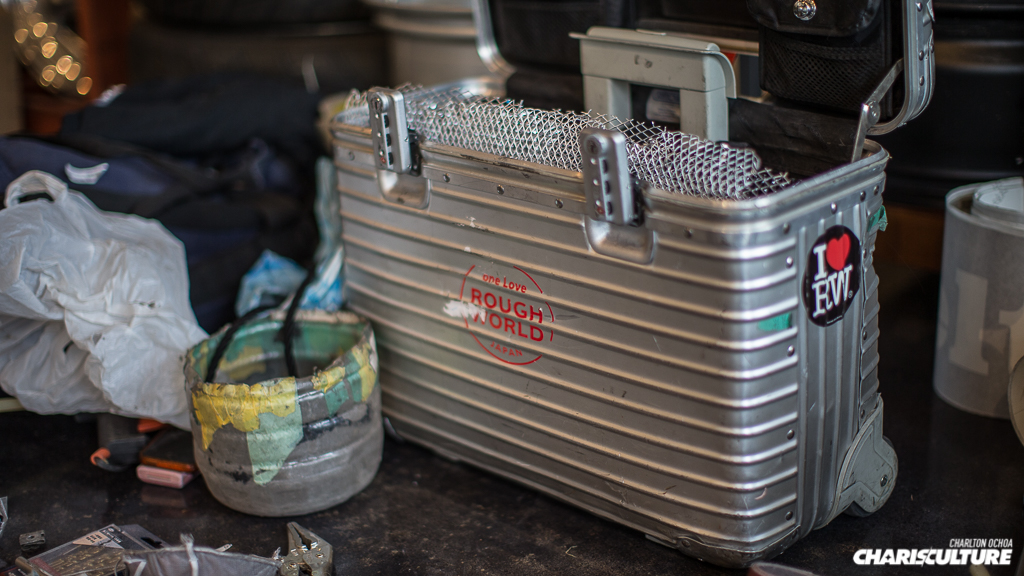 Nakai’s personal toolset is also pretty cool. He lays everything out on the floor in a manner that would make an OCD mechanic cringe. Nonetheless, it works, and it’s something just about anyone working on their own car in a garage trying to get the job done can relate to. 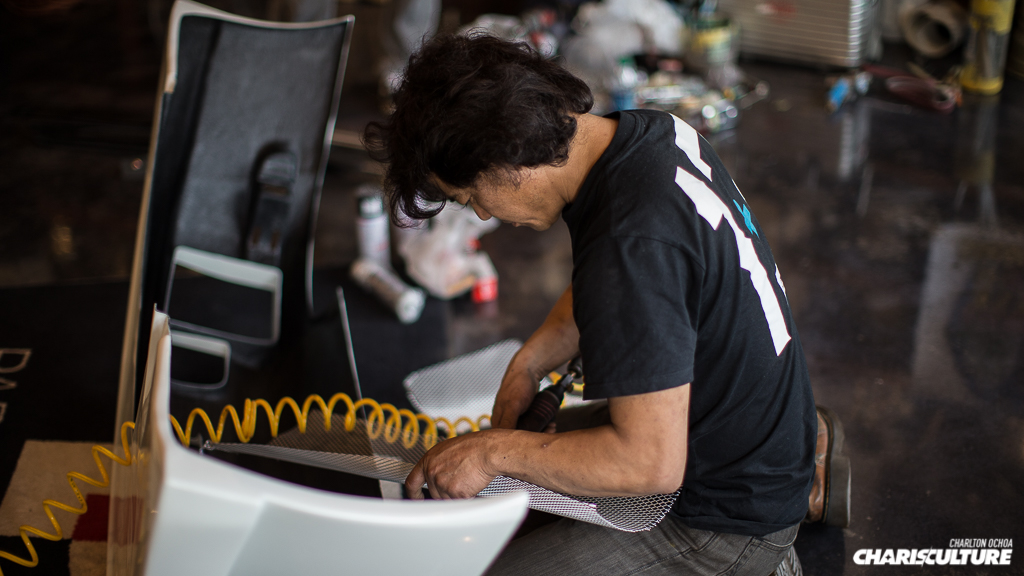 There is an immense amount of attention to detail, which is key. You can’t cut corners in a build like this, and I have seen many people try to get out of just doing something right in order to do it quickly, in even the most expensive builds. This is something about Nakai I can appreciate – he takes his time, and even the parts of the car you can’t see are well put together. 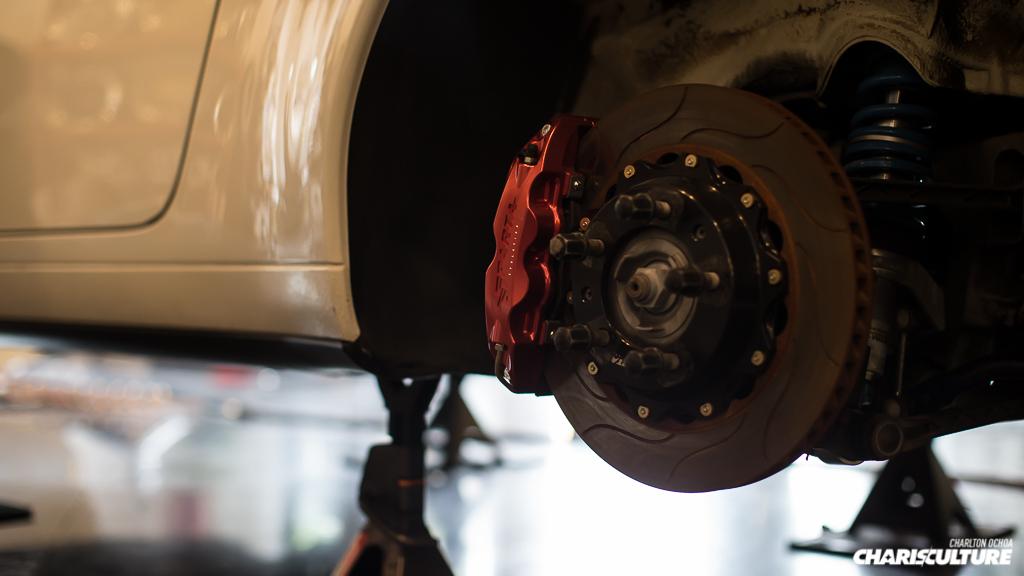 This particular car was not only visually appealing, but also, from the machine to the brakes, everything had been upgraded. (We have more on this supercharged white flower coming your way, so stay tuned!) 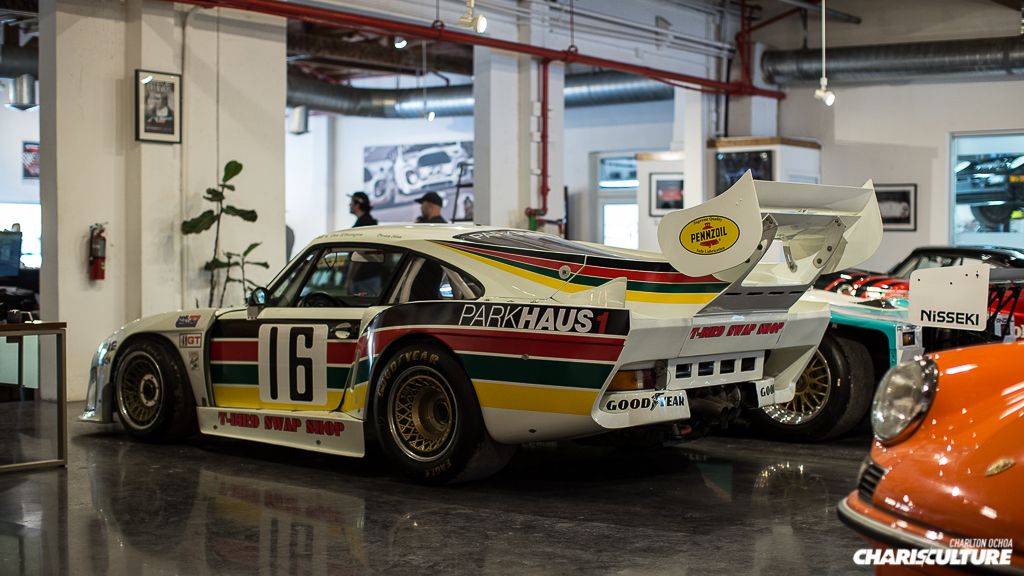 As Nakai took a break, I found myself roaming around the shop. This wasn’t my first time at Parkhaus1, but I feel like every time I come here, there is an amazing assortment of client, personal, show and race cars that I would never have had the chance to be up close to otherwise. 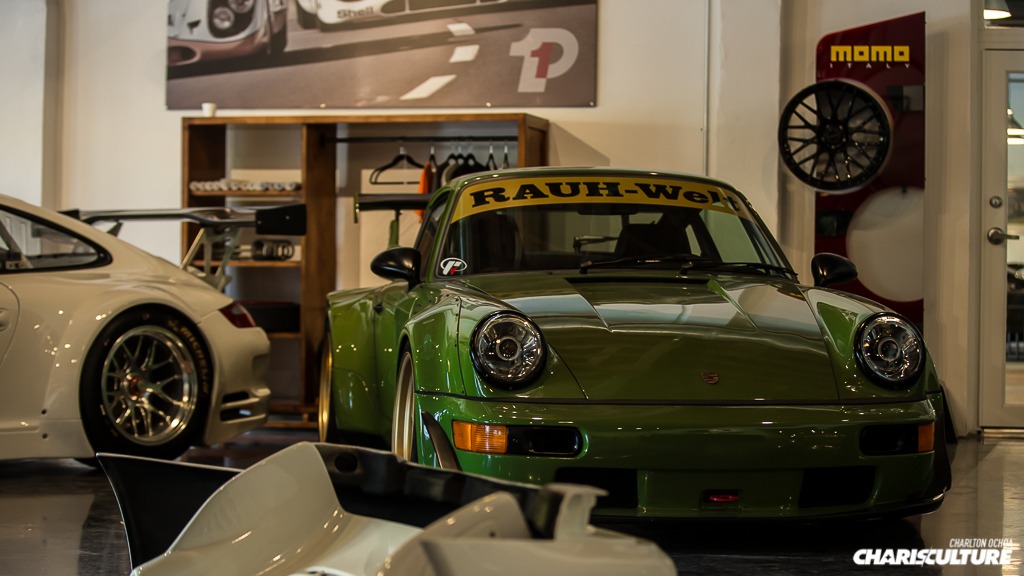 Tate Askew also brought Clermont, his Atlanta RWB build, down to have in the showroom for people to see and give them an idea of what the new build will look like in the near future. This car has been very popular on the web, and we even saw it at SEMA a few months back. 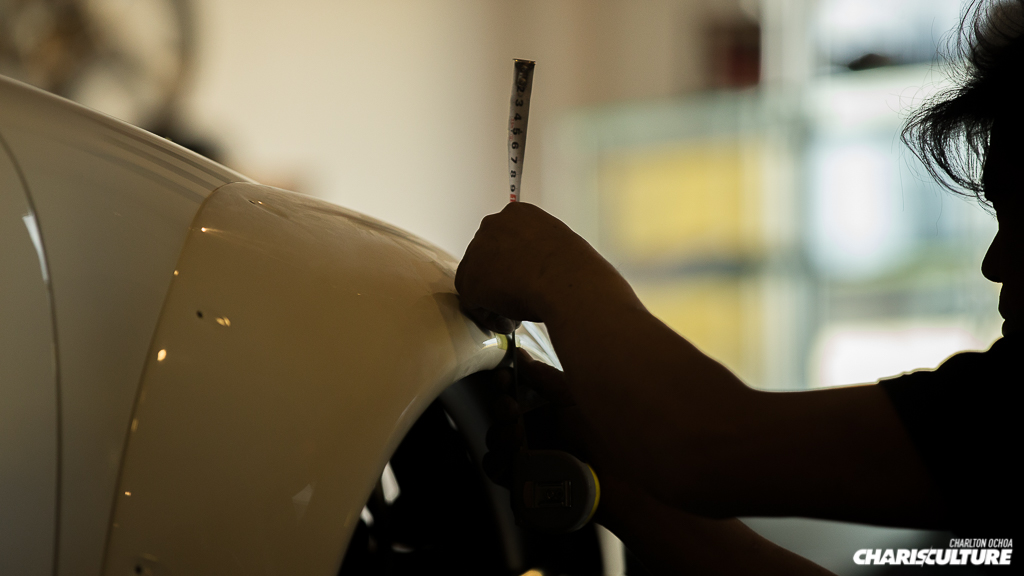 Everything Nakai has done is measured by hand, eye and tape. From alignment to ride height, there is no use of fancy machinery, just his personal experience and judgement. 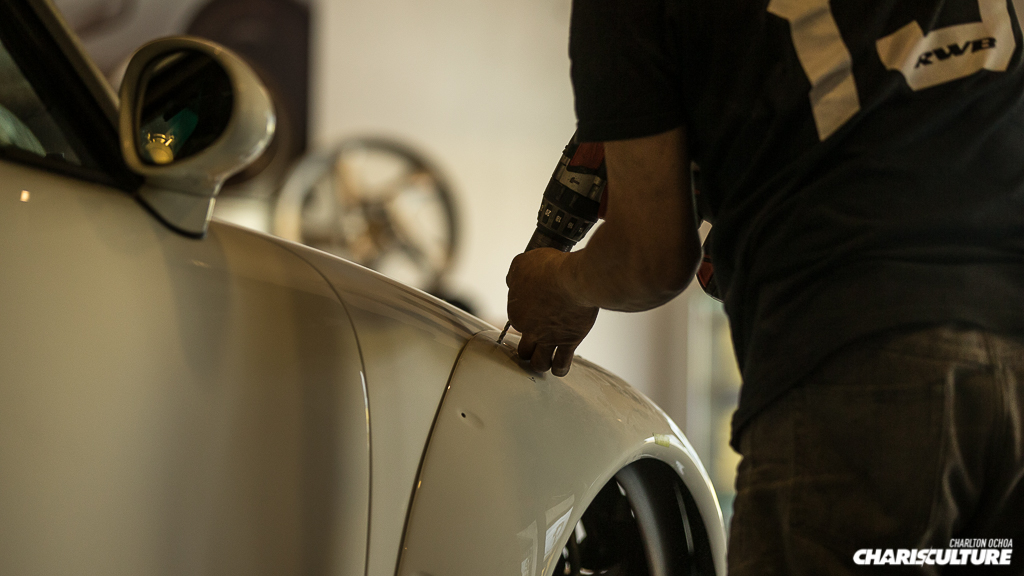 At first, it’s just a test fit of the overfenders. Then, he begins to drill into the car, which as you are watching, even being a fan of the builds, you realize, this is really happening. However, that is relatively salvageable. 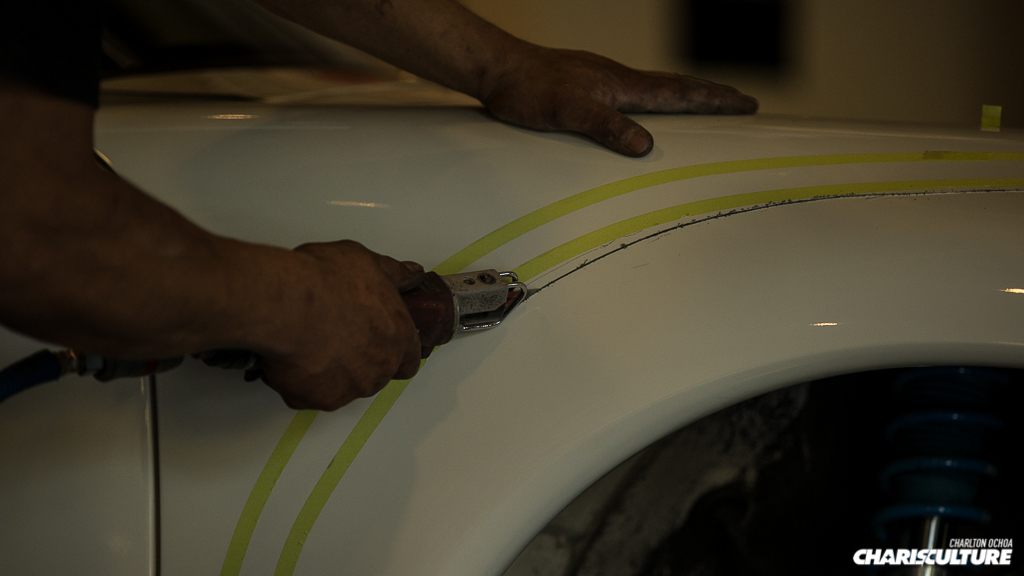 But then he begins to cut into the fender, and it’s a one way ticket into no man’s land. This is the part that many Porsche and automotive enthusiasts consider sacrilege. If there is anyone to trust with the process though, it is Nakai-san. 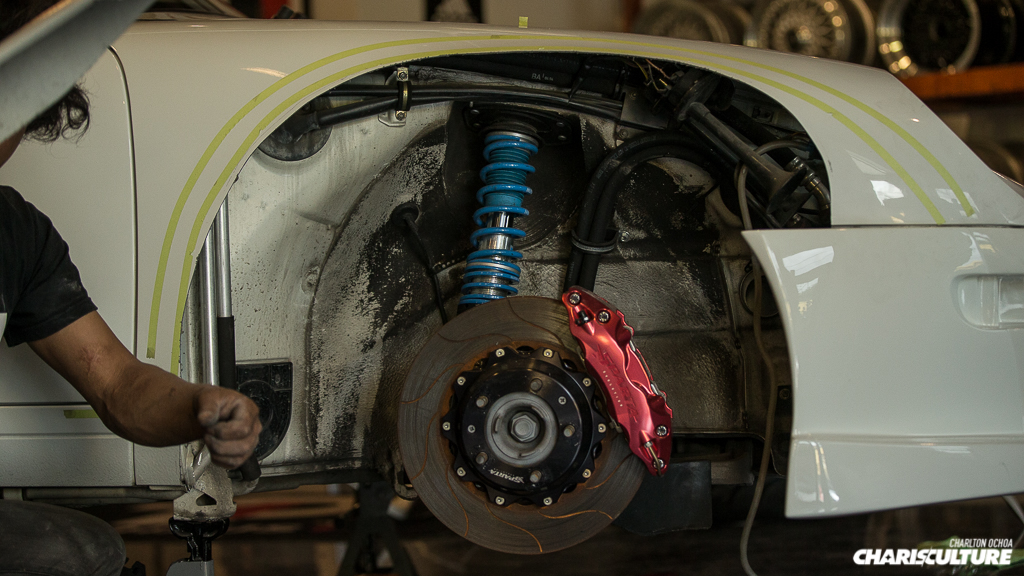 Everything is now exposed like never before, and the car becomes part of a special group. 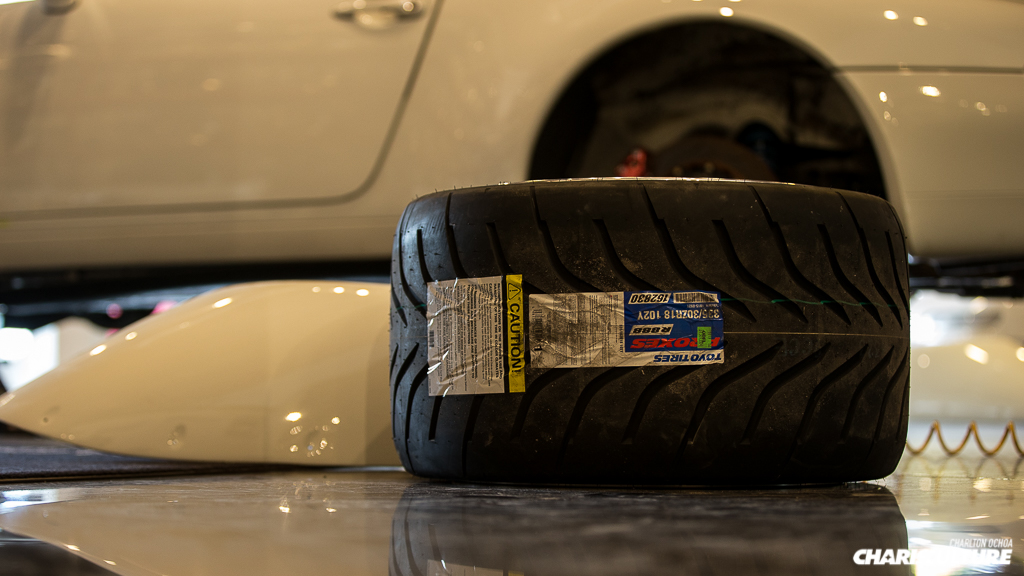 Seeing how there was no way in hell you could previously fit a set of 18×13 wheels with a 335 tire, this is the only way to get it done. 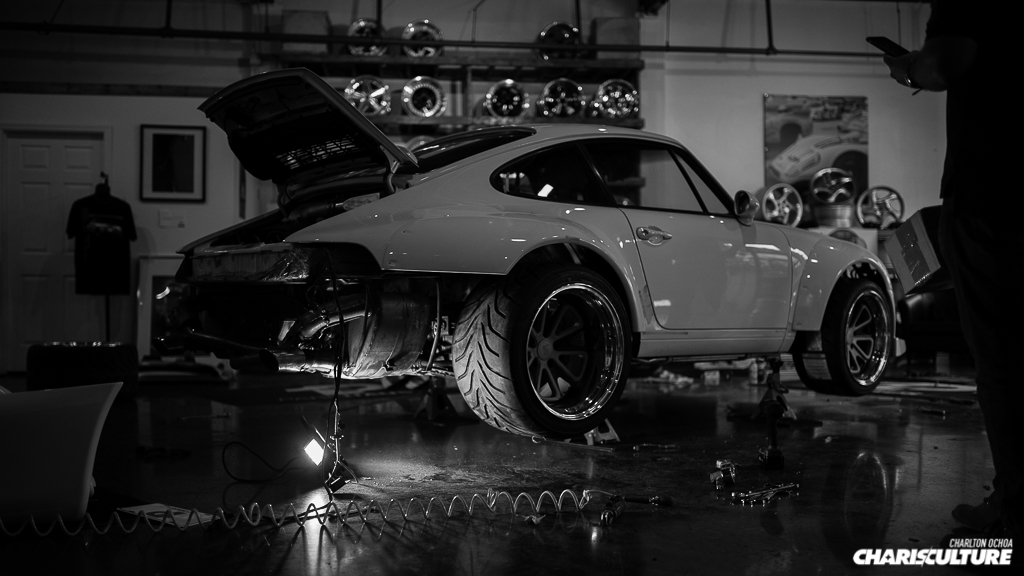 Nakai-San was very kind to us, and I could not imagine working as calmly and efficiently as he does with so many people keeping an eye on your every move. However, he is a pro and is very kind to the onlookers. With that, Day 1 is finished, and from this point on, it’s a matter of wrapping up the rear bumper, new trunk lid and all the little things.This particular build was a three-day workshop, all of which was pretty cool to witness up close. This particular build now has a name ‘Yukinohana’ ( 雪の花 ）,which translates to ‘SnowFlower’.

If you are interested in more photos from the day please check them out Here.