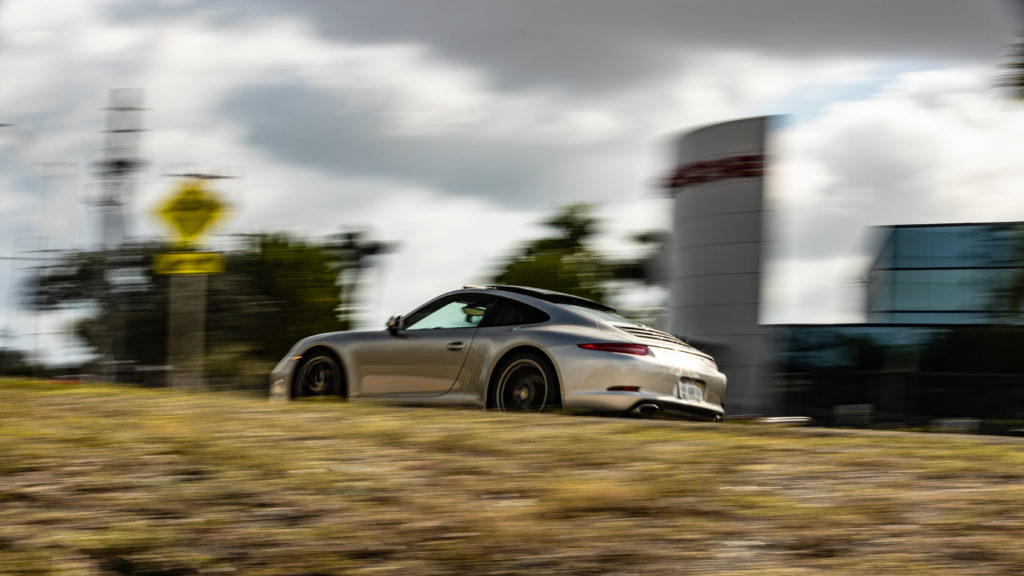 I think it’s safe to say that February is Porsche month and it all starts with Cars & Brunch 4 at Champion Porsche. This marks my 3rd year in a row attending Champion’s ability to attract all types of cars and provide tasty brunch.

I decided to get to Champion nice and early. I had just returned from a shoot in North Carolina and hadn’t driven the xB in weeks. So I spent extra time tooling around on 95 and US1 making a very unnecessary loop that ended at the McDonald’s on the same side of the road as Champion.

After downing a McDonald’s sugar injected mango smoothie I went over to my usual parking spot. This beautiful 1963 Impala was there to greet me. Yes, I know what you’re thinking, it did not have hydraulics, it was on air. Most low riders I’ve seen have hydros so this exception was rather exciting. Seeing this beauty on air was really something else.

A few more cars showed up. This one happens to belong to the one and only Sam Dobbins, Creative Director of Vossen wheels. Catching up with fellow enthusiasts and creatives is always nice. Sam and I spoke briefly and then Champion’s resident photographer Kyle Fletcher (@kfletch) came out of the building. Kyle joined the conversation as well.

I took my leave from the group as more cars and vendors arrived. The parking lot was starting to fill up so I made my rounds.

As I approached the “VIP” parking area I saw this gorgeous BMW i8…Roadster. It turns out this was Bill Adam’s ride for the week! I ran into him shortly after taking this photo. Bill told me that he was in love with the details of this particular model. The color and interior were just incredible. This is the brand new Roadster version of the i8. I think BMW should have been making these since the first i8! Just stunning.

Eventually Bill and I walked inside to check out the 1st pre-launch 911 in Florida and it was beautiful. We spent quite some time looking over the body lines. We couldn’t get over how wide the rear was yet it was almost unnoticeable. What really intrigued me was the 3rd brake light integration into the rear grill. It was so subtle and so natural that I didn’t even see it at first! Detail shot, check.

As Bill and I entered the building to look at the 911, Kyle mentioned he was going out to shoot pans of the arriving cars. I told him that I would see him out there once I finished drooling over the 911. After a brief walk around Bill and I parted ways. Approaching my usual spot I saw Kyle on the opposite side waiting for cars to come by. I went over to him and we snapped away. This perspective gives a tree heavy background that helps break up the look of the other location.

Kyle had to get back to the main building to work the event. I stuck around. I moved to my usual side since two friends were only 20 minutes away.

Once I crossed the street I found my usual spot and fell right into the groove. Shooting North towards Copans has a nice green background. The slow shutter combined with cars ripping down the road really makes that background nice and creamy.

After a few more pans I got a message from my friends saying that they were 5 minutes away. I turned my attention to the 95 / Copans exit ramp. After a few test shots I found the pan area I liked. Now I wait.

Little did I know, the spot I chose was also home to a massive red ant colony. If you live in Florida then you’re probably (painfully) aware of red ants. For those that aren’t I hope you never encounter them in the ways that I have. Red ants don’t attack randomly, they wait until they have a decent amount of the colony on their intruder and then send a signal for everyone to bite in unison.

It’s very effective, by the time you realize that you have stepped in an ant pile, it’s too late, you’re getting bit all over. So here I am standing in a red ant pile as my friend Andy comes cruising down the off ramp in his RHD RX-7, swatting ants off my legs with one hand and trying to get pan shots with the other. I’m amazed that I was able to get anything decent during the ant attack.

To make matters worse as I jumped out of the ant pile I landed in a much smaller one just south of it as my other friend Adrian was coming down the ramp in his 4 door R32. I snapped a few pics and then found a safe spot to stand where I slung my camera and took off my shoes to smack them together in an effort to get the remaining ants off. All of this transpired in the course of 3 agonizing minutes.

Thankfully I had my water bottle with me so I doused the bites with water to soothe the pain, put on my shoes and headed back to the main parking lot where all the action was. I found Andy and Adrian and told them what had happened, all we could do was laugh.

I walked around the now packed parking lot to investigate the new arrivals. The beauty of Cars & Brunch is that it brings out some amazing cars from all over. There were so many GT3s in one area that it felt like they were just giving these things away! It also has the largest draw of Alfa Romeo 4Cs I’ve seen, rarely do I see these cars but this and previous years have had about 5 of them in different colors and trims. There was also an abundance of McLarens present as well, I think almost all the current models were represented save for a Senna and P1

Approaching the “VIP” area again my heart quickened as I spotted a 1959 Alfa Romeo Giulietta Sprint Veloce backing into its spot, the same spot that 2 years ago displayed a Giulia Super. I had a feeling it was the same owner, Mark as he has a love of Alfas. Sure enough it was. Mark got out and we said our hellos. He told me that he had this car shipped from Seattle so it could be here for the Cars & Brunch 4 event.

To add to Mark’s coolness factor not only does he have a great collection of cars he also races them as much as he can. I still have some photos to be edited from the second time I met him. He dropped by the local Diamonds and Donuts event last year with his 1962 Ferrari 250GT Lusso Competizione, 1 of 3 built and yes he races the crap out of that beauty as well.

Food trucks provided the brunch this year. Champion did this the 1st year I went as well. When you arrive you are given a card that’s good for multiple items from the food trucks. Between Andy, Adrian and myself we could have eaten for days!

During our brunching the guys mentioned the Bugatti Chiron that came in. I said “Yeah the red one, I got a pan shot of it coming in.” Andy said “Yeah it’s ‘red’ but red carbon fiber.” Of course I had to investigate. Upon closer inspection, the whole car was left carbon fiber. The red appears to be in the clear coat. It was just mesmerizing. There was a dude nearby wearing all tie dye, that’s when I realized this was Tim’s (@hapyhipi) car. This would be my second time seeing a Chiron in person the 1st was last year at The Quail when Bugatti unveiled it. After a few more detail shots the guys and I said goodbye and headed home.

As usual the love of all things auto brings together a great group of people to share experiences and stories and in this case, around some very tasty (free) brunch!