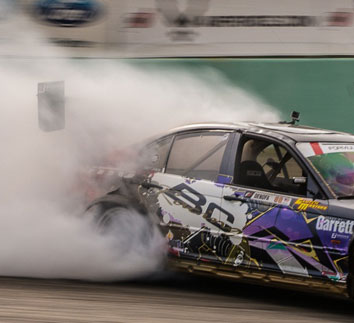 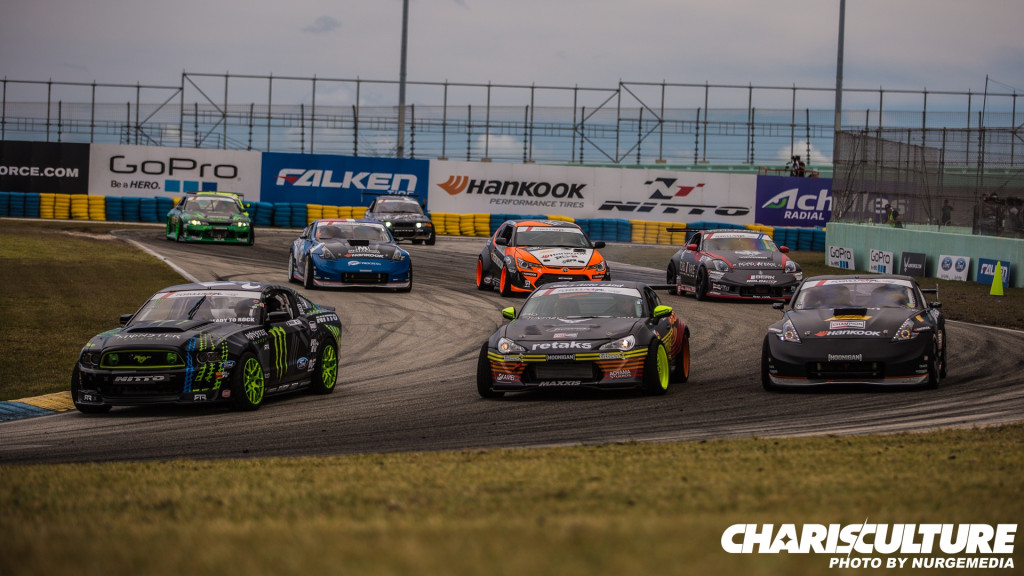 The track officials told us that we could go down to the area in front of the grandstands before the cars came in, so I went as far out as I could and assumed my sniper stance to catch the cars rolling in. I think it worked out nicely. 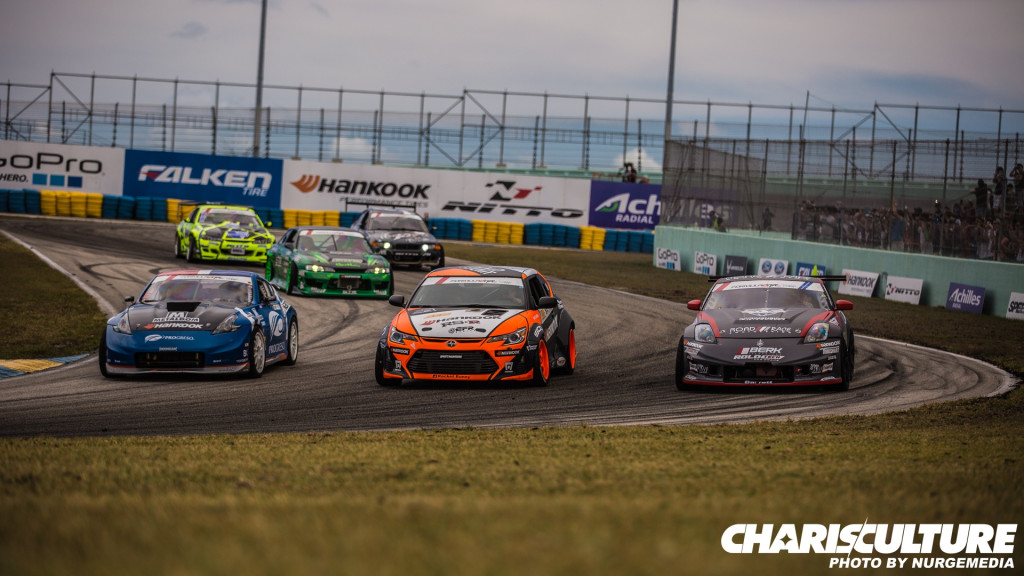 I started back towards the grandstands for the introduction ceremony, snapping shots as I went to catch moments the competitors missed when the cameras weren’t on them. I like to capture the mental state of preparedness it takes to fling your car into a controlled slide at over 80mph. It’s not for the weak of heart. That’s for sure. 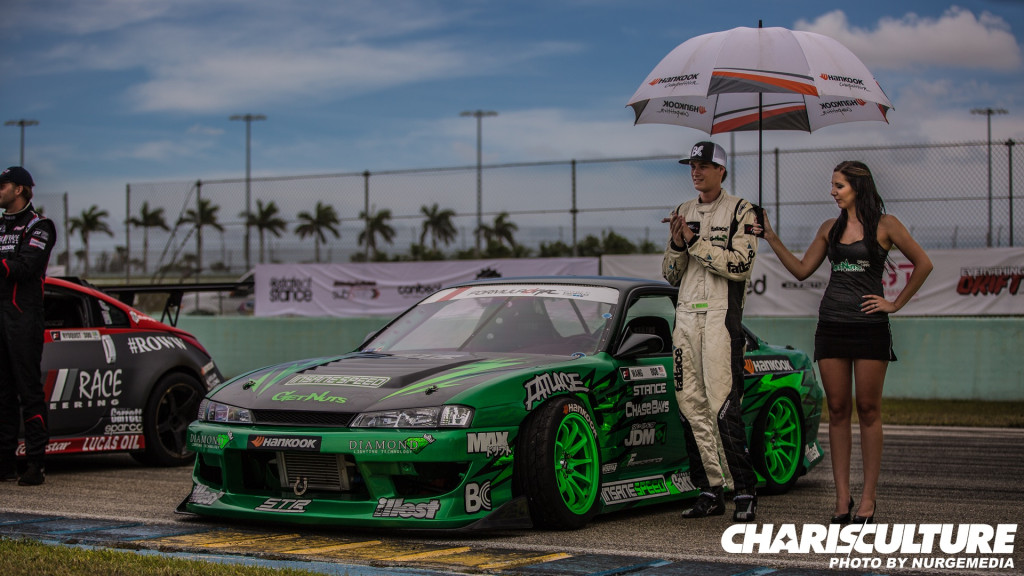 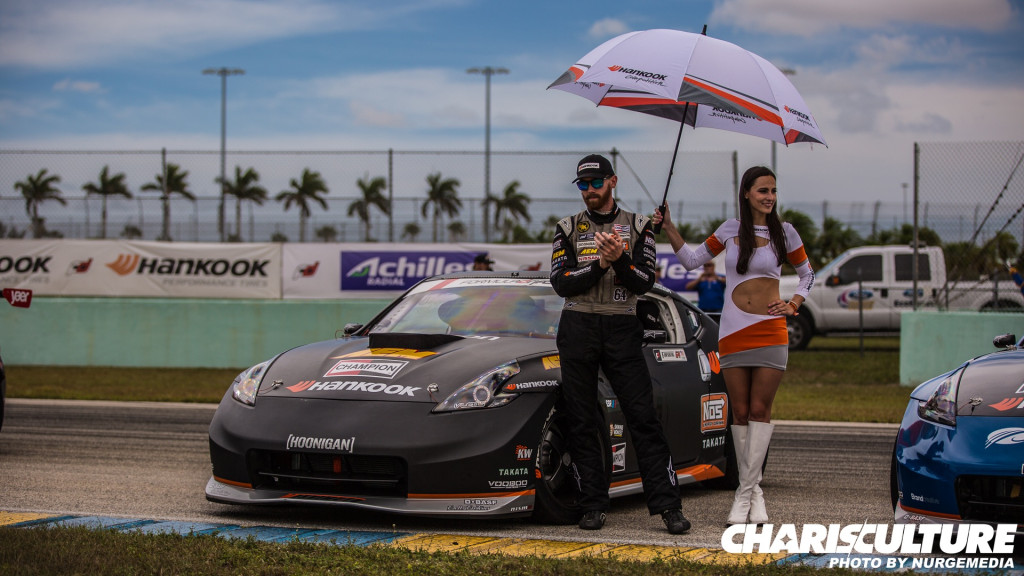 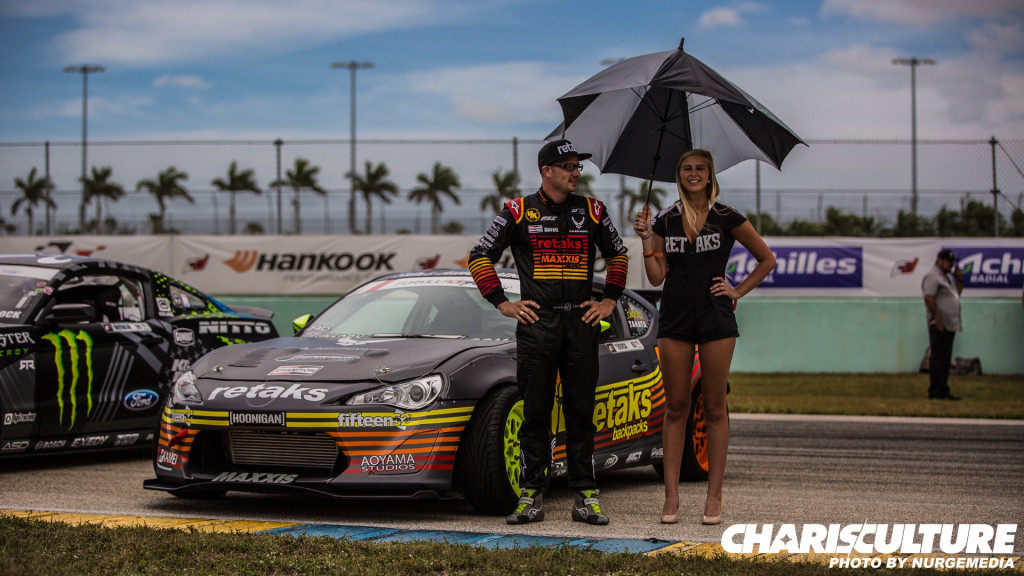 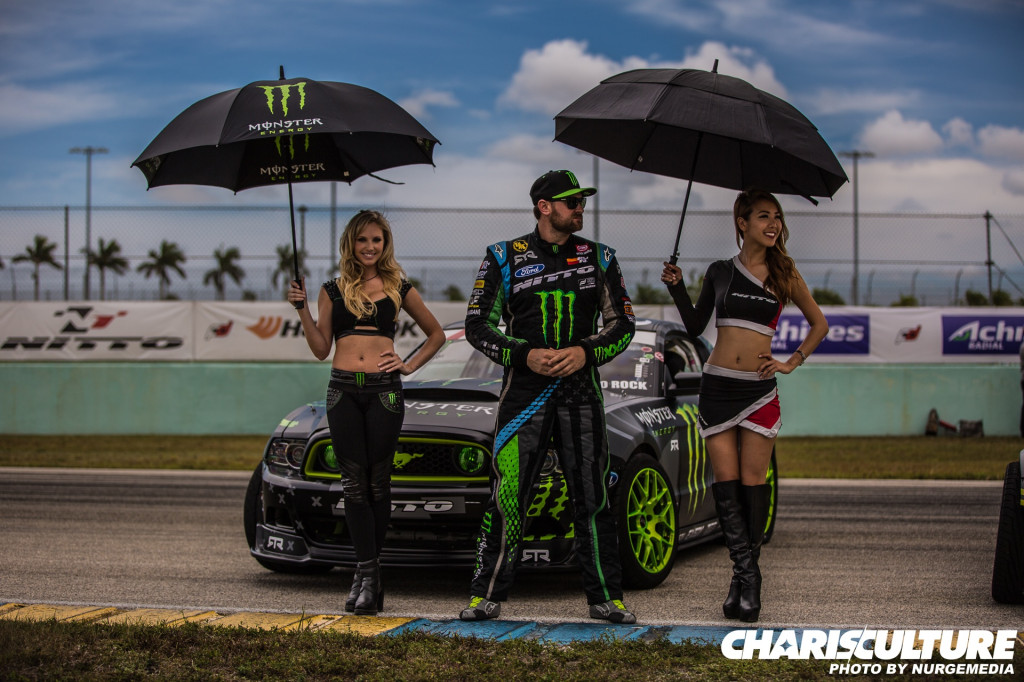 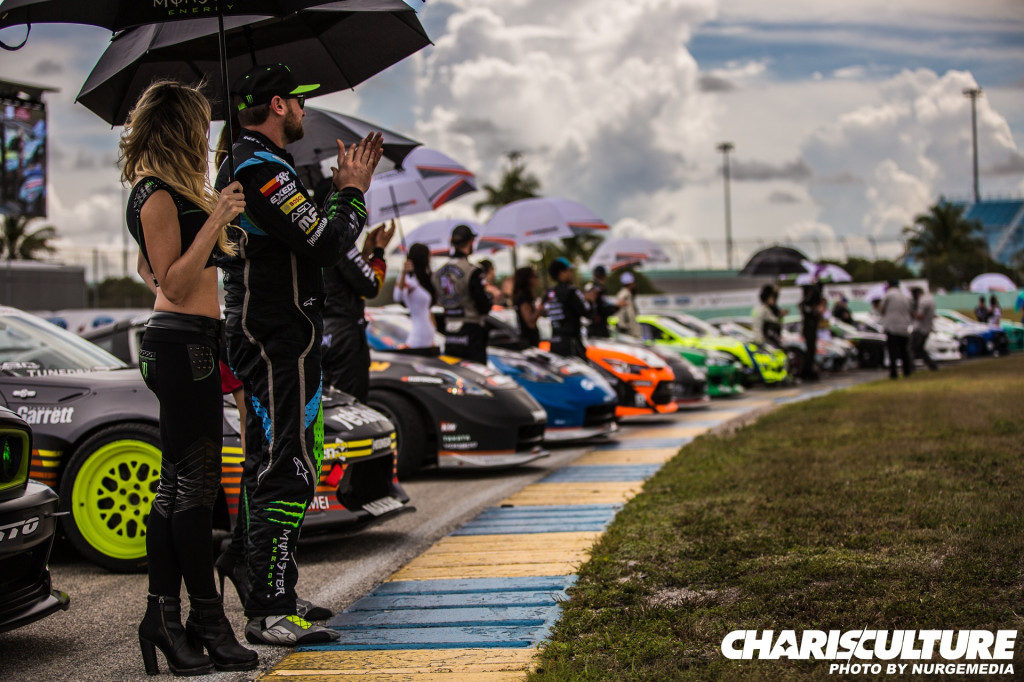 The Top 16 announcement is always something to look forward to. Everyone in the crowd gets a glimpse at all of the top drivers with a little bit of show as they go off to line up for the first race. 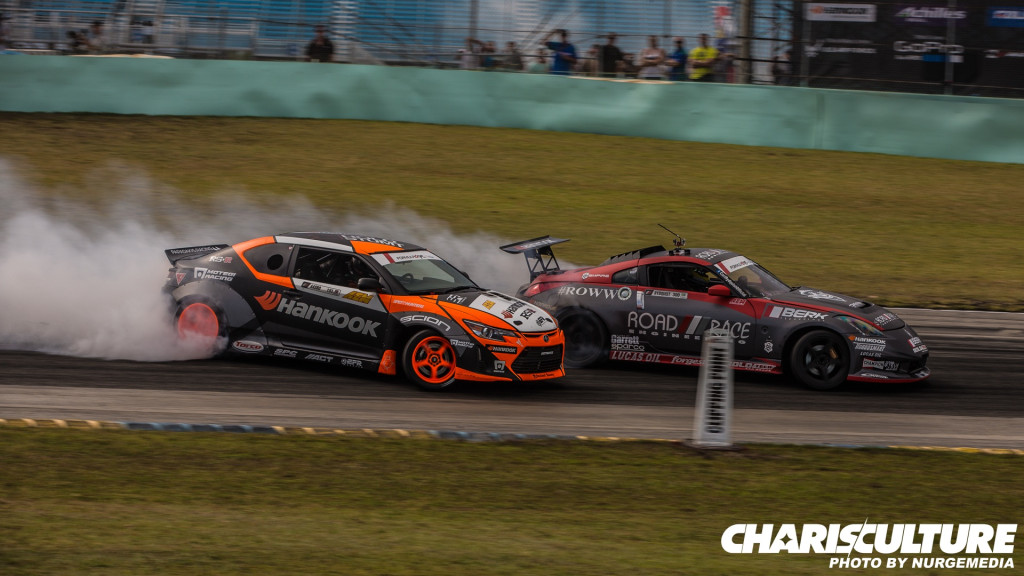 The drivers got in their cars, and I ran to get back to my choice spot behind the k-rail. As they drove out, some slid and some just cruised on by. This was going to be great!

Then the Action began… 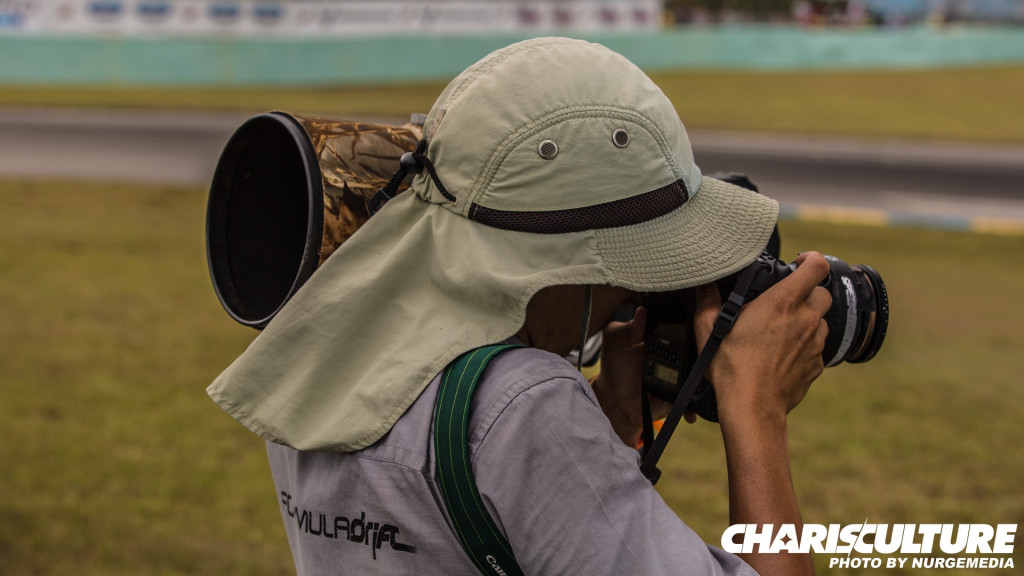 Then out of nowhere, Larry Chen appeared with his arsenal of photographic awesomeness. Even though we were so close to the cars and the sounds of V8s and tires ripping down the track, all I could hear was the sound of Mr. Chen’s camera going off like a machine gun.

Luckily, I was able to tune into the track’s radio frequency to hear the announcements of the cars as they were coming in. Perfect. Now I would know what I was about to shoot! 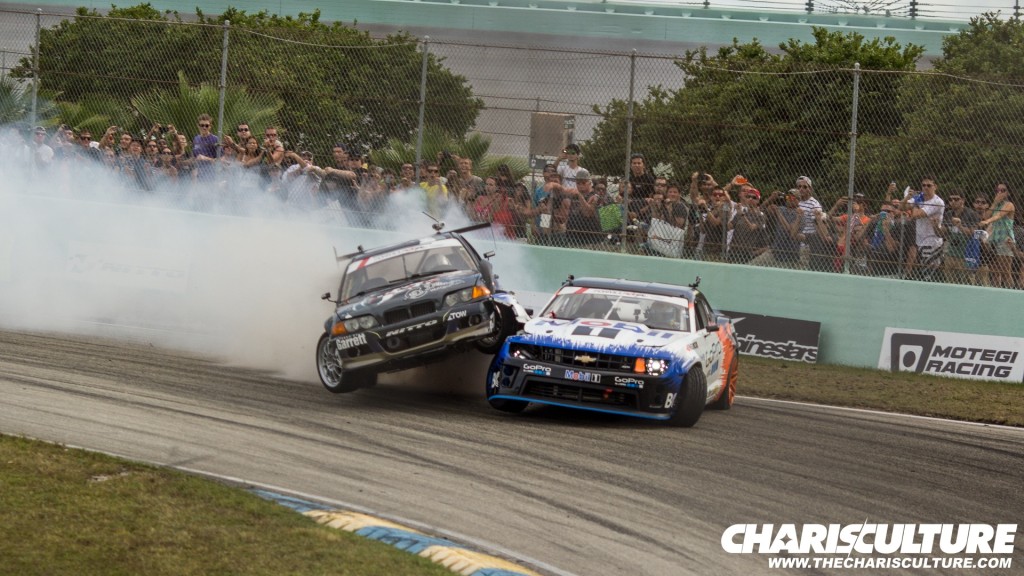 One of the most interesting parts of the event was the round between Chelsea DeNofa and Tyler McQuarrie. It all started in the first round when Chelsea’s driver side rode up on Tyler’s right fender sending him off track into the grass and put Chelsea out front to finish off his drift. We all cringed as they collided and hoped that they were both okay.

Thankfully, their second run was uneventful, other than the fact that Tyler was now driving without any front fenders or a bumper! 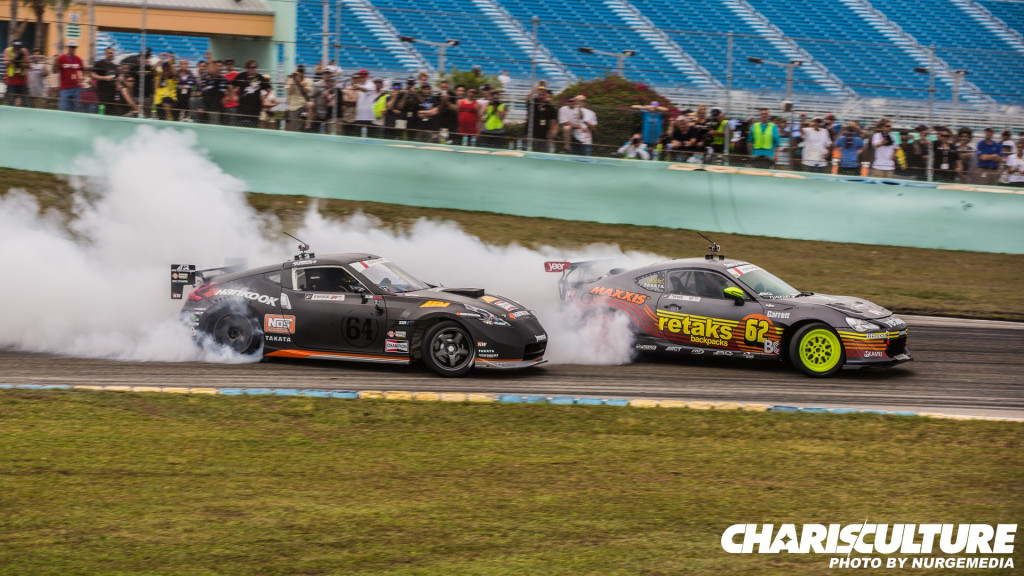 Chris Forsberg and Ryan Tuerck battling it out after entering the crowd’s line of sight. 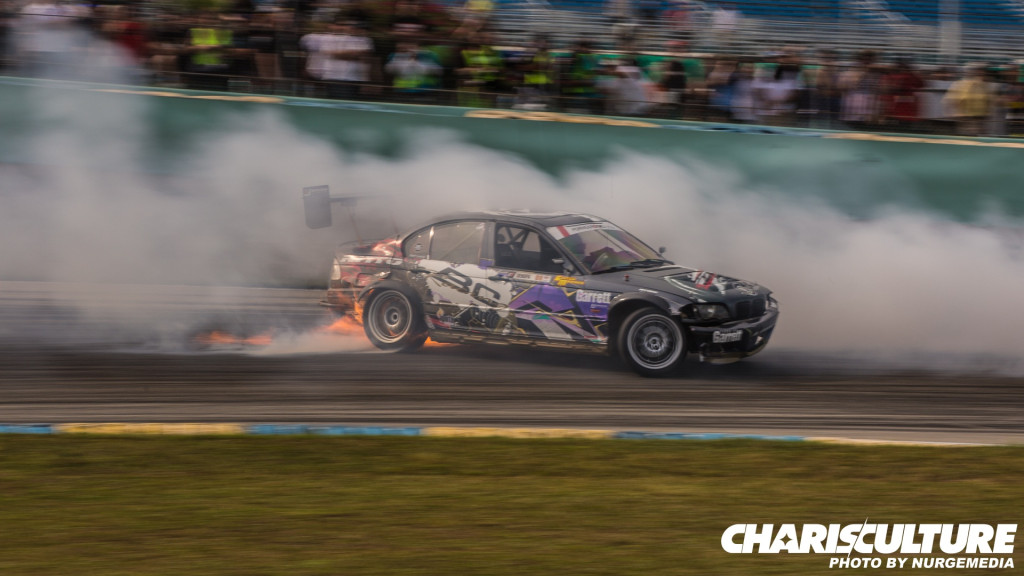 It wasn’t until their “one-more-time” round that things started to heat up. As Chelsea was following Tyler into the big turn, something under his rear tires caught fire and left a flame trail behind his car into the last part of the turn. We were all joking around that it looked like he was going back in time a la Back to the Future. What was even funnier, his car number was 88! 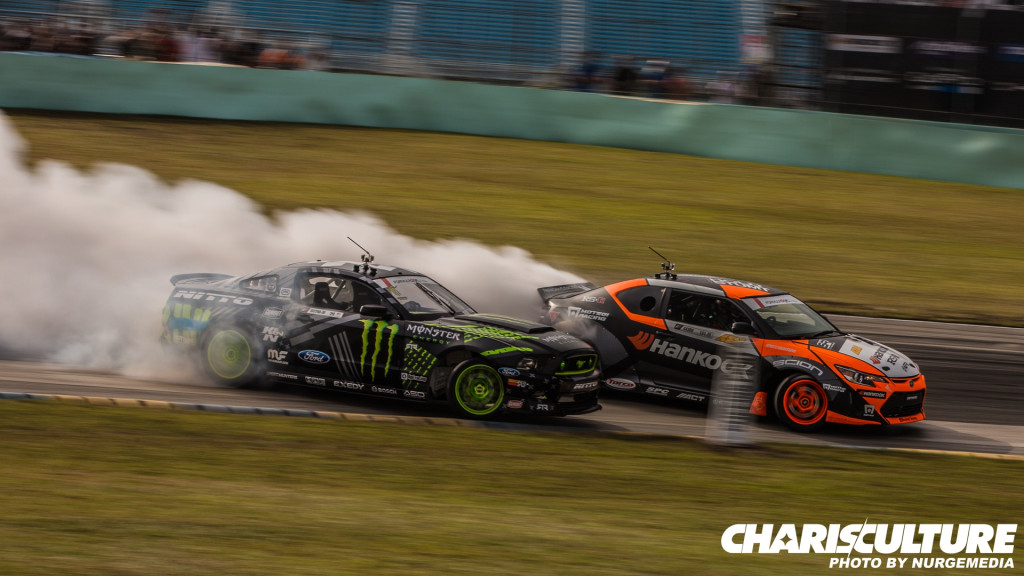 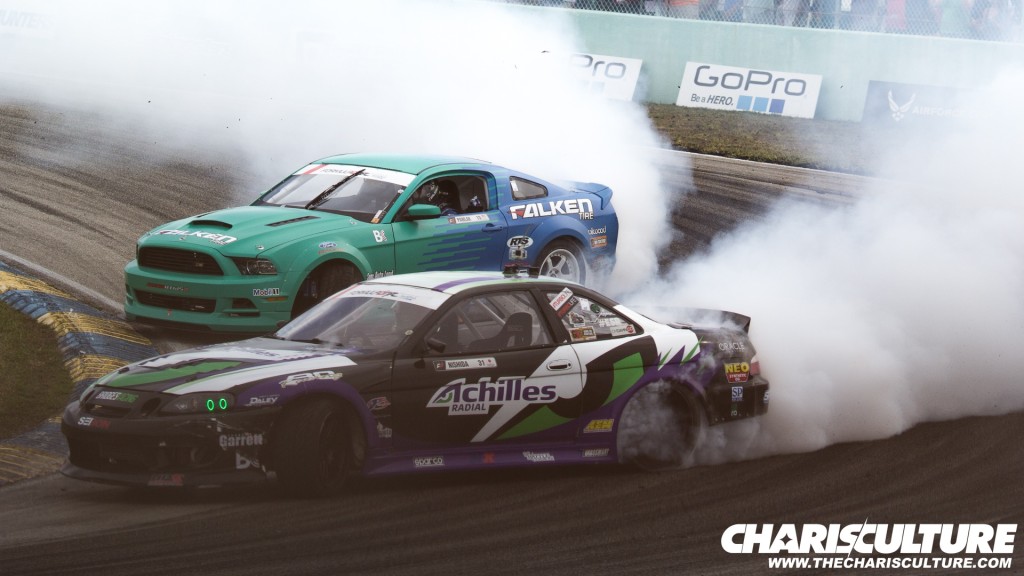 I was shooting a little faster than I would have liked to, so I made adjustments as reach run finished. I was pleased with many of the shots I was able to get considering where I was on the track. I definitely made the best of my situation. 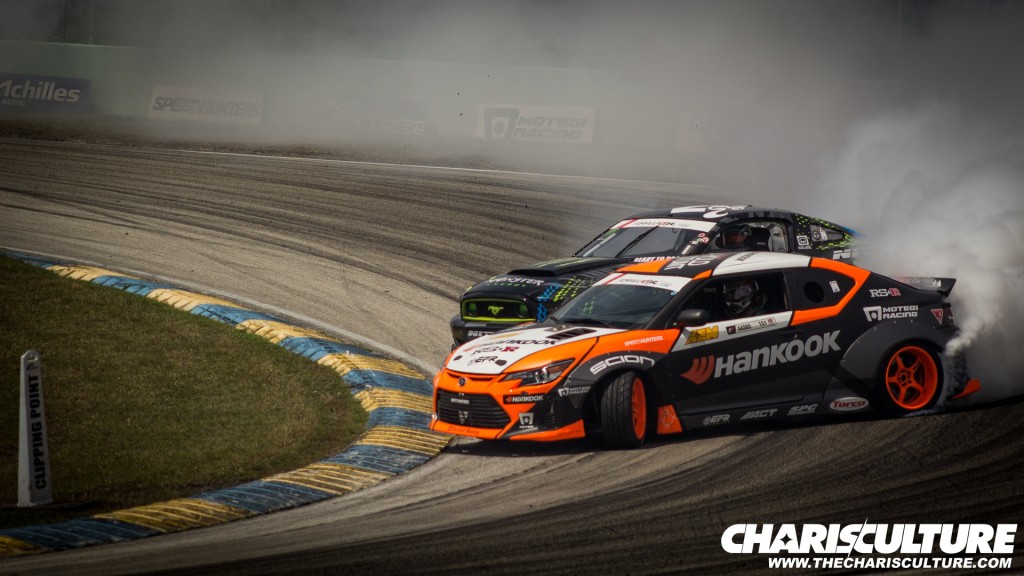 To be honest, another great aspect of covering these events is that the cars practically shoot themselves. Between the smoke, angle and car designs, you have an amazing opportunity at every turn. 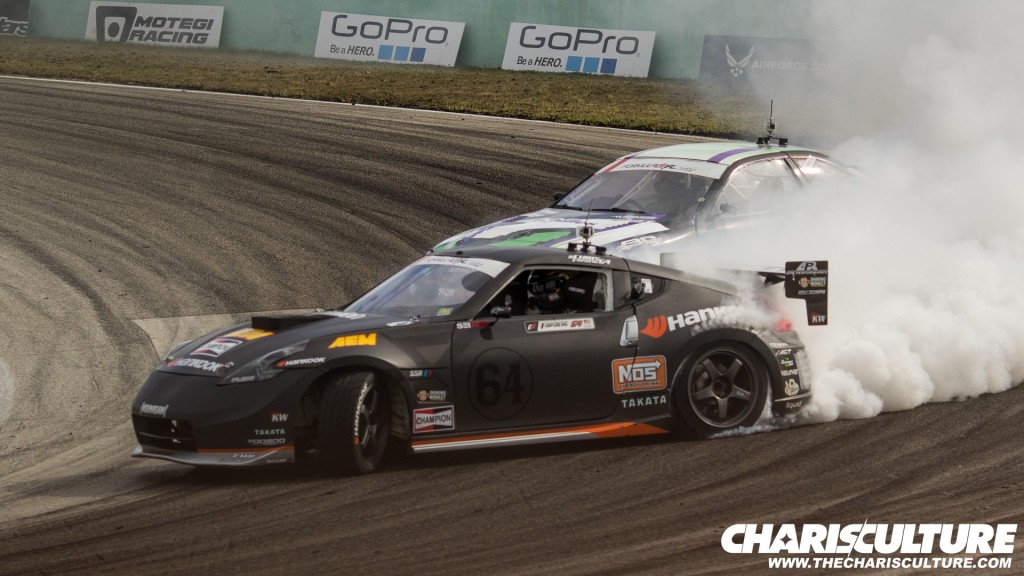 Also, the dynamic changes so much when both cars are in the shot. So as the tandem battles get more intense, it becomes better in just about every way possible. 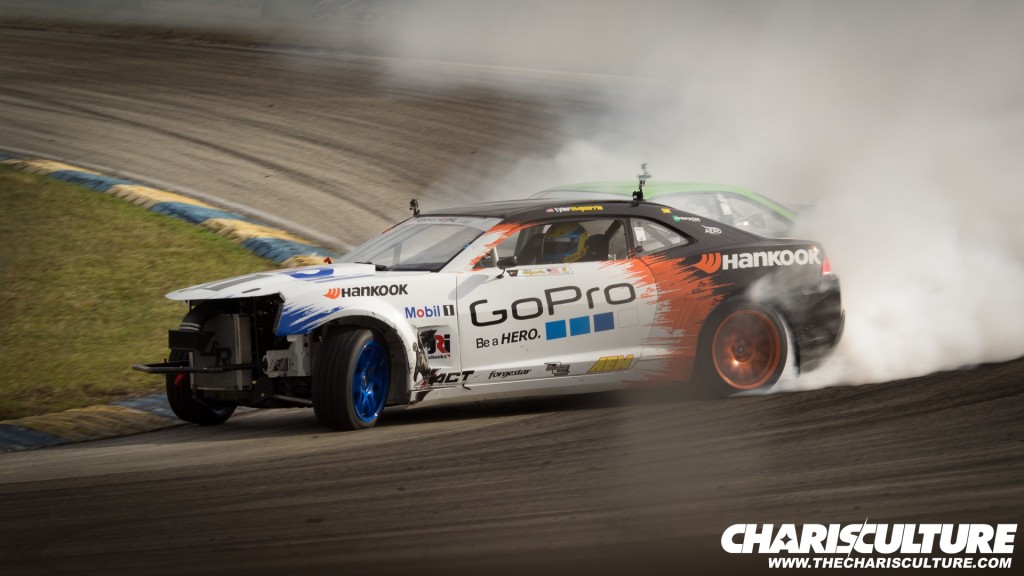 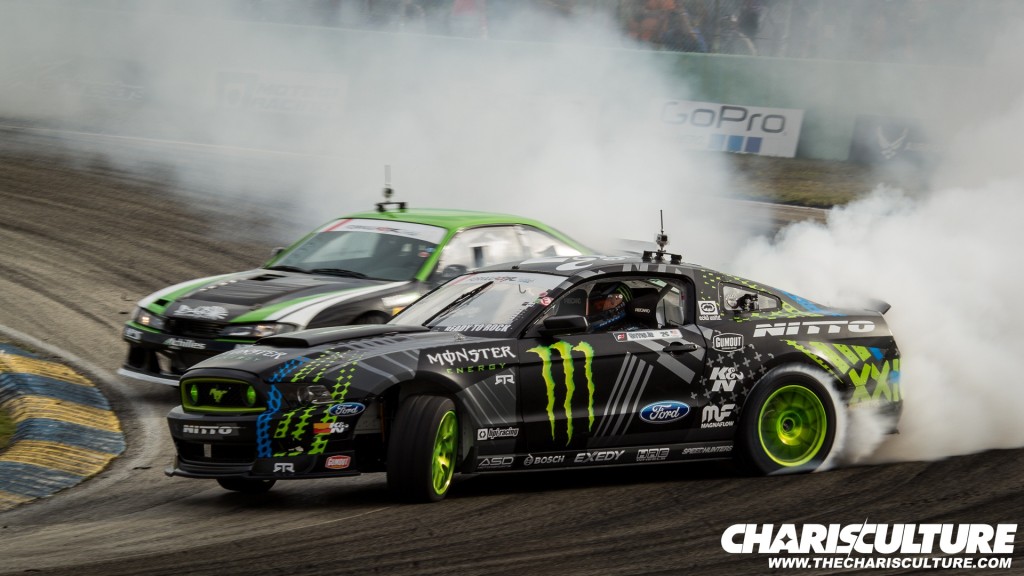 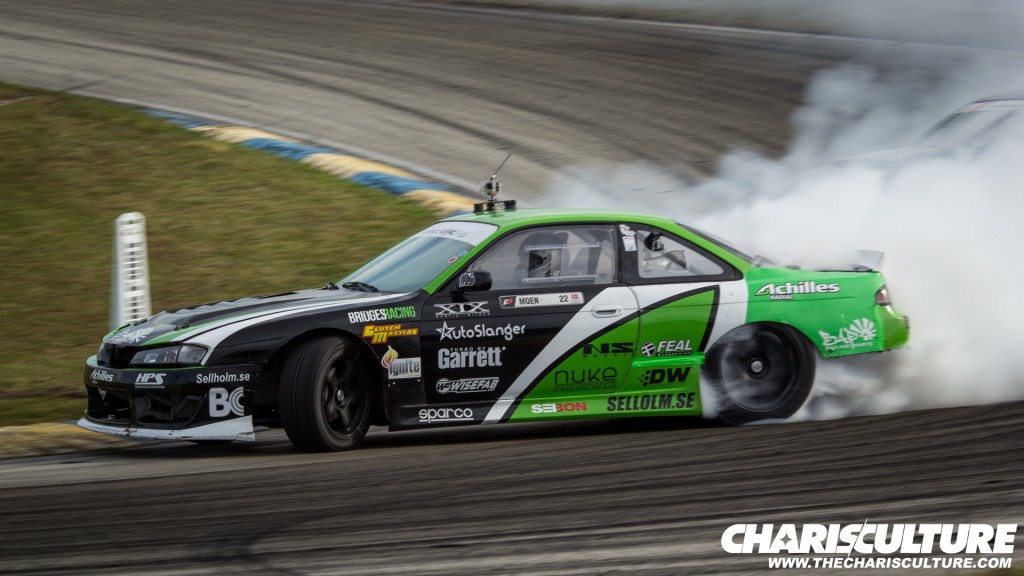 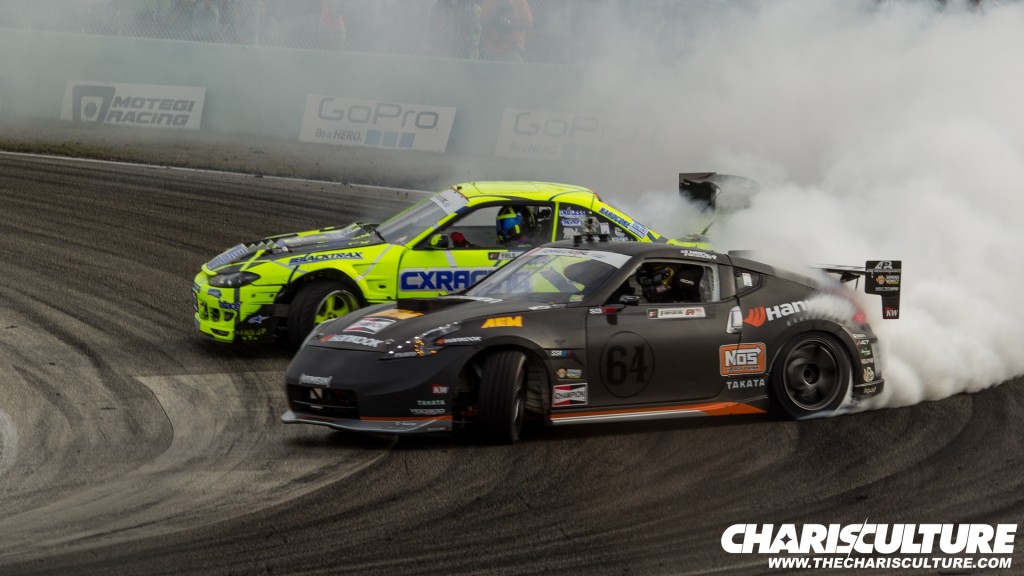 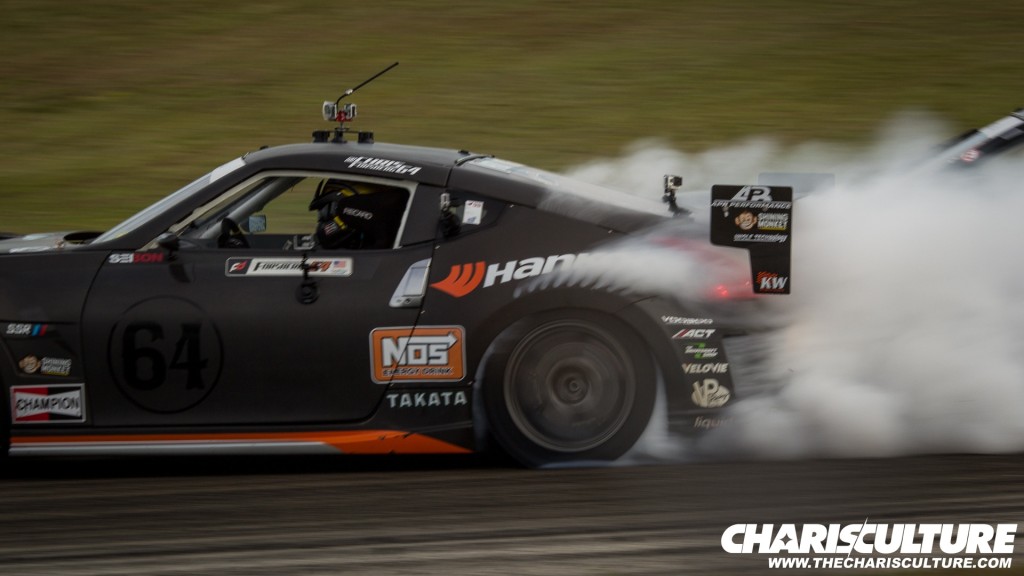 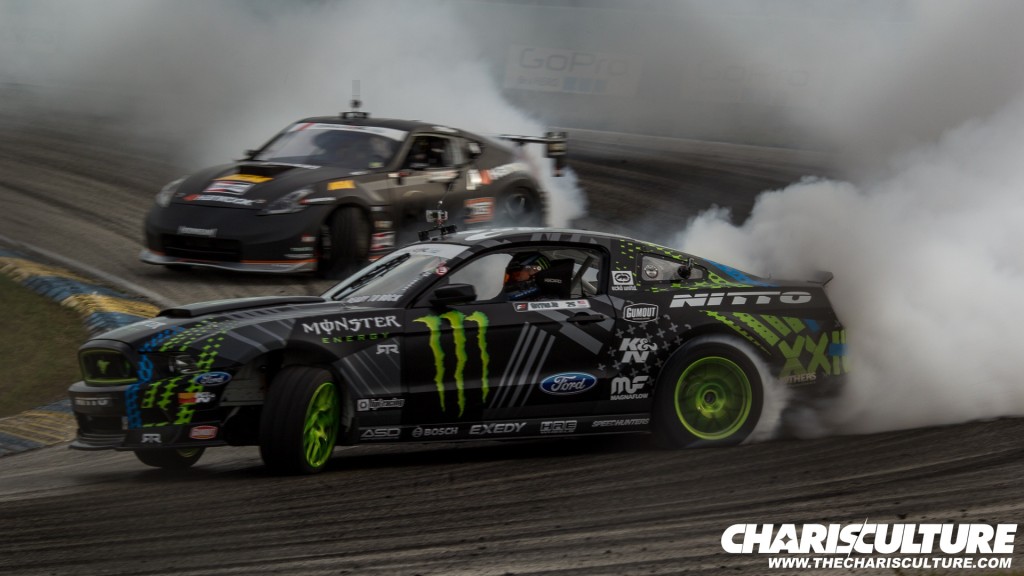 As the rounds narrowed, we found ourselves watching Vaughn Gittin Jr. and Chris Forsberg battle it out for first. It was a close match, but in the end, JR took the win.